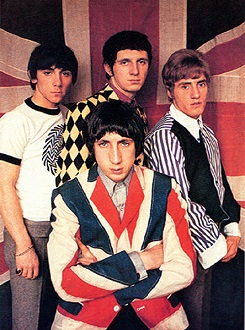 The Who are a British rock group. Their best known work includes the songs "My Generation", "Pinball Wizard" and "Won't Get Fooled Again" and their rock opera Tommy.[1] Their concerts became notorious since they always smashed up their instruments after each show.

Roger Daltrey was referenced twice: in Do You Like My New Car? ("Roger Daltrey never laid a hand on me") and Carolina Hard-Core Ecstasy ("I had a Roger Daltrey cape on")

Keith Moon played a nun in 200 Motels (The Film). He was later mentioned in We're Turning Again ("We can laugh at Keith Moon's jokes.")

In The Frank Zappa Interview Picture Disk, pt.2 Zappa mentioned an encounter with Pete Townshend: "I've met Pete but I don't know what I can say about his guitar playing."