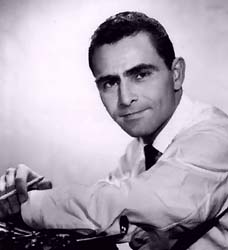 The Twilight Zone (1959-1964) was a popular and influential American TV series, written and hosted by Rod Serling. It featured mysterious, paranormal, futuristic, dystopian or disturbing stories, usually with a plot twist and Serling's moral message.

Ida Lupino directed one episode of this series, The Masks.

Zappa and The Twilight Zone

The theme of this TV program is referenced in Jesus Thinks You're A Jerk and Rhymin' Man and again during some live concerts.

Zappa once said that the enthusiastic response of the Czechs during political meetings with Václav Havel sometimes felt like "The Twilight Zone".

Host Rod Serling was also featured on the cover of We're Only In It For The Money.