Bruce Fowler (born July 10, 1947), Tom Fowler (born June 10, 1951) and Walt Fowler (born March 2, 1955) are three bothers who played with Zappa during the 1970s and 1980s. They are the sons of William Fowler (1917 - 2009) and Beatrice Fowler (1921 - 1996). There are two other brothers Steve and Ed who are also musicians but did not play with Zappa. They grew up in Salt Lake City, Utah where their father (a jazz educator teaching at the University of Utah, musician, composer and a columnist for DownBeat magazine) helped establish a jazz education program at Westminster College in Salt Lake City.

"Bruce came back to Salt Lake City after that tour was finished and started teaching me all the music that they had been playing. And I pretty much learned all of it, like two hours worth. Not that I could play all of it ... Basically, Don Preston and I were replacing Ruth Underwood. Marimba music is very difficult to replicate on a trumpet!! Some is unplayable. But when I went down to LA to audition, we rehearsed a whole new show pretty much, NOT playing 90% of the music I had learned. So that was quite the mental exercise. Four hours of new [to me] Zappa music, memorized! Crazy! But that was one of the best experiences of my life." - Walt Fowler

Their recorded contributions to Zappa's bands are spread across numerous titles:

A recording of the 1972 band with Bruce, Wazoo, was not issued until 2007. He can also be heard on Sleep Dirt, Orchestral Favorites and Imaginary Diseases

Tom can be heard on You Can't Do That On Stage Anymore Vol. 2 and Volume 3, Frank Zappa Plays The Music Of Frank Zappa, Quaudiophiliac and The Dub Room Special!.

Bruce and Tom can be heard on Over-Nite Sensation, Apostrophe ('), Bongo Fury, Piquantique (BTB), You Can't Do That On Stage Anymore Vol. 1, The Lost Episodes and Läther.

Bruce and Walt can be heard on Broadway The Hard Way, The Best Band You Never Heard In Your Life, Make A Jazz Noise Here and Zappa '88: The Last U.S. Show.

After Zappa the brothers performed with various bands: Bruce played with Captain Beefheart, Eric Clapton and Randy Newman amongst many. He has also worked on numerous film scores. Tom has played with Jean-Luc Ponty, Don Preston and George Duke. Walt has toured with numerous acts from Johnny Guitar Watson to Diana Ross and has also worked on film soundtracks.

They worked together in their own band The Fowler Brothers. 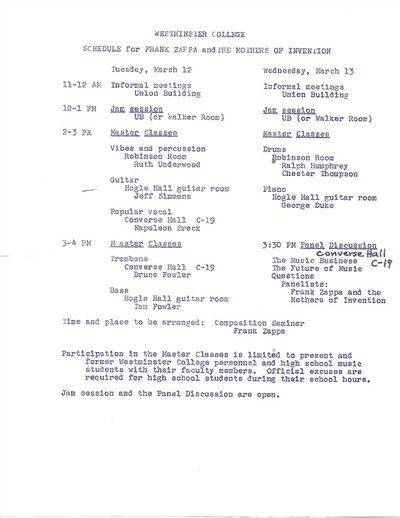 With the Fowler's connection with Westminster College (Walt studied there) the 1974 band, with Bruce and Tom, broke off from their tour to run sessions for the students at the college on 12th and 13th March. They were accompanied by Gail Zappa and Herb Cohen.

The first noon jam session, with Zappa conducting, was captured by a student but Cohen snatched the recording proffering a few dollars to cover the cost of the tape.

The band returned to Salt Lake City on the 18th March to play at The Terrace Ballroom and the students were invited to attend the afternoon soundcheck.