Difference between revisions of "The Allman Brothers Band" 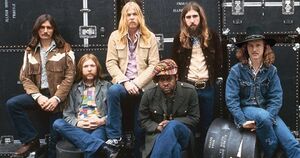 The Allman Brothers Band were an American rock band who incorporated elements of blues, jazz, and country music, and their live shows have jam band-style improvisation and instrumental songs.

Zappa covered their song Whipping Post, after a Finnish fan had requested for the song during a concert. None of Zappa's musicians knew the song, so Zappa included it as a staple of his concert repertoire.

In a March 7, 2011 interview with the drummer of the band, Butch Trucks, Trucks claimed Zappa was an important influence on the Allman Brothers Band's music.

Butch Trucks: "Yeah, fairly well. Yeah we did several shows with him early on. He was such an influence on us. One of the first what I would call truly great shows I ever saw was in, probably, 1967. The band I was with went to New York to audition to play one of the clubs there and Zappa was playing. It was one of the first public performances of “Absolutely Free” and it had a timpani and about 20 people onstage. They did “Suzy Creamcheese” and all this performance art, and it was just amazing. I had no idea that a rock and roll band could get up and sound like that. My background before I got into rock and roll was classical music and that’s all I knew. [But when I saw Zappa] it was so big—it was so huge, the sound coming from that stage. It reminded me of Beethoven. Up to that point, I had been listening to the Ventures, the early Beatles and Chuck Berry, which had its place but was pretty simple. It is three chords and it’s not exactly what you call big and sophisticated. Hearing Zappa and hearing them doing “Absolutely Free” blew my mind. It just changed my whole concept of what you could do with rock and roll or with what you called rock—it ain’t rock and roll anymore, it’s something else. It’s evolved into something else. And you can label it whatever you want but it’s still music. It’s all music."

Well, I'll tell you how it happened. We were playing Helsinki, Finland about six or eight years ago, and in the middle of this very quiet, nice concert hall from the back of the room a voice rings out, "Whipping Post." And I thought, if we only knew it we could blow this guy's socks off. You know, it would be great to just ... sure, fuck you, "Whipping Post" ... all right, here it is. So, when we got Bobbie Martin in the band I said, "He can sing the shit out of 'Whipping Post' and so let's go for it."

What did the other members of your band think when you said ...
"God damn right, let's do it." They love it. They enjoy playing it.

Did you similarly like Duane Allman?
I never listened to their music. I like "Whipping Post," though. In fact, I think they even premiered it when we were working together at this pop festival at the baseball stadium in Atlanta years and years and years ago. It was the first time I heard this song and I liked it then, thought it was really good but I am not an Allman Brothers consumer.

But, as a guitarist you were obviously aware of Duane Allman.
Well, I heard him like the same way I hear other things, if it happens to be on the radio when I go someplace. I don't follow it, I don't consume it.

But, you do offer a kind of homage to a famous dead guy who was a great player.
The credit is all his. It's his song. I didn't invent it. It's a great song.