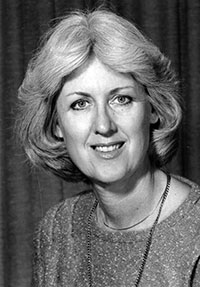 Brigham performed as soprano soloist with the New York Philharmonic, Berlin Philharmonic, Cleveland Orchestra, Domaine Musical of Paris, and Maggio Musicale in Florence, to mention only a few, under the batons of Pierre Boulez (also name-checked on the cover of "Freak Out!"), Hans Werner Henze, Lukas Foss and Francesco Molinari-Pradella, among others. Her recordings range from early music through Giacomo Puccini up to avant-garde works.

Between 1967 and 1970 she worked at California State University in Northridge, after which she took a job as "Associate Professor of Music, Music Performance" at the Buffalo University, teaching "Vocal Diction", "Vocal Literature", "Applied Voice", and "Chamber Music" until 2001.

Zappa and Brigham were both music students at Pomona College in the late 1950s. Whereas Brigham studied piano, Zappa studied composition from 1961 on. They attended some concerts in 1959 and for a brief while after she left college they kept correspondence. [1]

Sylvia Brigham is mentioned in the list of influences in the sleeve of Zappa's album Freak Out! (1966), under the heading: "These People Have Contributed Materially In Many Ways To Make Our Music What It Is. Please Do Not Hold It Against Them".