Difference between revisions of "Ronald Reagan" 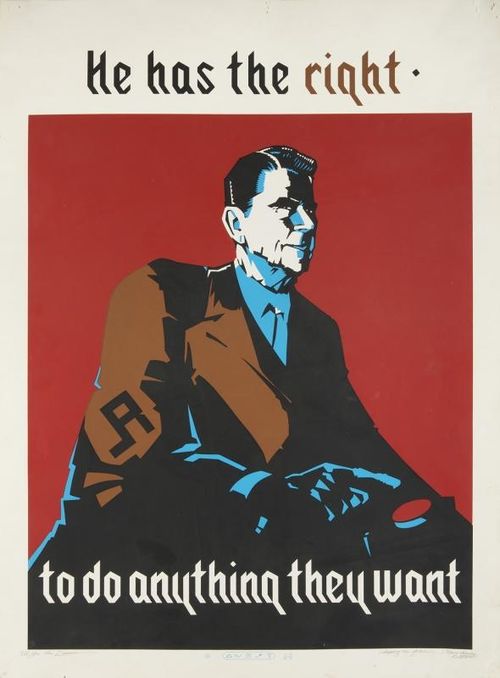 Ronald Reagan poster which hung in Zappa's basement from 1988 until his death.

The Reagan administration was also noted for spending millions of dollars on defense, especially against international communism. During the early 1980s Reagan was both praised and criticized for his aggressive denouncing of the Soviet Union (even calling it "the evil empire" in 1983). His government ordered several nuclear missiles to be placed in Europe, which lead to large protests in the continent. In 1983 Reagan introduced his Star Wars defense plan, intended to protect the U.S against possible space missiles. After Mikhail Sergeyevich Gorbachev became Soviet leader in 1985 Gorbachev and Reagan started more peaceful negotiations and signed several treaties decreasing both countries' nuclear arsenals. Since the fall of the Berlin Wall in 1989 and total collapse of the Soviet Union in 1991, Reagan is often seen as the man who ended the Cold War, even though this honor could also be attributed to Gorbachev.

Reagan's foreign policy was criticized for financially supporting several dubious organizations and Presidents in their battle against Communism, including Saddam Hussein and Osama Bin Laden. After a left-wing military coup in Grenada in 1983 Reagan sent troops to successfully restore the old regime. In 1985-1987 Reagan ordered bombings in Libya in reaction to several terrorist attacks supported by Muhammar Khadaffi.

In 1986 the Iran-Contra affair severely damaged President Reagan's believability. He and several other U.S. officials, including Oliver North, Ed Meese, Caspar Weinberger and John Poindexter secretly facilitated the sale of weapons to Iran in exchange for hostages so that the money could be used to finance the Contra rebels in Nicaragua who wanted to overthrow the socialist government in Nicaragua. Under the Boland Amendment, further funding of the Contras had been prohibited by the U.S. Congress, making the entire affair illegal. While North, Meese, Weinberger and Poindexter were forced to resign and convicted, it remains unclear how much Reagan knew about these illegal proceedings. The Tower Commission, who investigated the case, could not find direct evidence that he had prior knowledge of the program, but did claim that he as President was responsible and should've informed himself more about these activities.

Reagan also introduced a new economic system, which was criticized for causing huge budget deficits and quadrupling the United States national debt. His political and social views were supported by the religious right, the so-called Moral Majority, which consisted of controversial preachers like Pat Robertson and Jerry Falwell.

Today Reagan is still an icon for Republicans and conservatives and considered to be the most influential American President since Franklin D. Roosevelt in the 1930s-1940s. 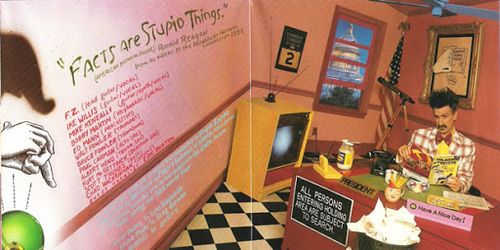 Ronald Reagan quote on the wall during the Video From Hell photo shoot, 1988. Also seen in the sleeve of Broadway The Hard Way. 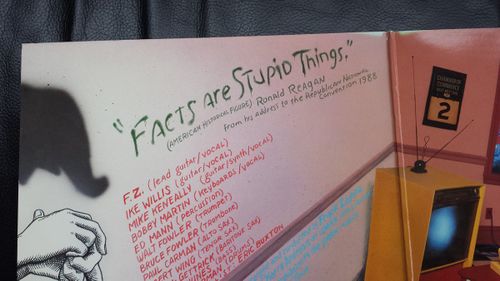 Close-up of Ronald Reagan quote on the wall during the Video From Hell photo shoot, 1988.

Frank Zappa was very critical about the Reagan administration. As early as the 1960s Zappa criticized Reagan, while he was still Governor of California. The liner notes of We're Only In It For The Money (1968) mention that the concentration camp in The Chrome Plated Megaphone Of Destiny is called "Camp Reagan". The song Agency Man, performed during the 1968 concert in the Royal Albert Hall in London, was inspired by Reagan (the give away line is "From the heart of old Death Valley, to the ruling of our land" Reagan hosted a TV show in the early 60s called 'Death Valley Days'. That show is also mentioned in'The Blue Light' which was released just before Reagan took office as president: "Death Valley Days, straight ahead! The future is scary - YES IT SURE IS").

During the 1980s, when Reagan became U.S. President, Zappa targeted his administration very directly. In the music video of You Are What You Is (1981) a lookalike of Reagan is featured on the electric chair. Reagan is mentioned in Zappa's songs The Untouchables, Star Wars Won't Work, Dickie's Such An Asshole, When The Lie's So Big, Reagan At Bitburg, the Broadway The Hard Way version of What Kind Of Girl Do You Think We Are? and Jesus Thinks You're A Jerk. Reagan is also a character in Dio Fa.

During the 1984-1985 PMRC debates Zappa wrote Reagan a letter of protest (Z-Pack - Letter to the President). He received no reply.

During a photo shoot for the cover of Video From Hell (also used in a chapter of The Real Frank Zappa Book) Zappa had a quote from Reagan during the Republican Convention in 1988 written on the wall: "Facts are stupid things."

Ronald Reagan was also mentioned in the liner notes of The MOFO Project/Object (2006) album. [2]

"The fact of the matter is that if I do an album that has any kind of a vocal on it from now on, the chances are that that vocal is going to be about a sociological or political topic. For example, I thought of one that I want to do just the other day called "Lie To Me," which would deal with a catalog of everything that the Reagan administration has been able to get away with for the last six years. That would be a worthwhile thing to stick in there." - Frank Zappa in Sample This!.

After Zappa voiced his intention of running for President, a journalist asked him what would make him different in comparison with other Presidents: "I work more hours. And I'm awake!" (FZ, interview in Ein Leben Als Extravaganza - Das Genie Frank Zappa.)