Difference between revisions of "Richard Wagner" 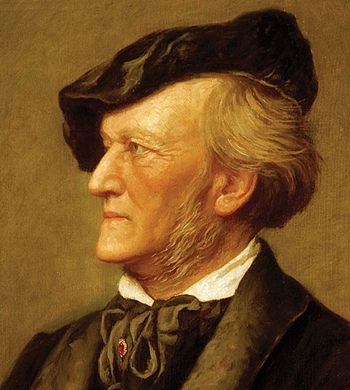 Wilhelm Richard Wagner (May 22, 1813 – February 13, 1883) was a German composer, conductor, music theorist, and essayist, primarily known for his operas (or "music dramas" as he later came to call them). Unlike most other great opera composers, Wagner always wrote the scenario and libretto for his works himself. Wagner's operas are noted for their length and loud sound. His most famous works are: "Lohengrin", "Parsifal", "Tannhäuser" and "Ring des Nibelungen".

"I actually like Wagner. I think Wagner was interesting. It's too long, but it's interesting. I have very few Wagner albums, but the things that I've heard, if you look at the time at which it was written, and what he's doing with the material, it's challenging." (Frank Zappa in The Mother Of All Interviews (Part 2))

"In many rock solos, guitar solos especially, there is a theatrical relation between the player and what he's playing, and the most "exciting" parts occur when it sounds as if what he's playing has got the upper hand. The drama is that he's conjured up a screaming musical monster, supposedly, and now the beast threatens to overcome him. The "excitement" comes from watching him master the "beast", surrender to it, or get even altogether and smash or burn the instrument. When someone like Jimi Hendrix presents this sexual fantasy, it can be Wagnerian." (Frank Zappa: The Mother of Us All)

"Dogs have long been one of Zappa's favorite subjects and on his last three albums he has injected the phrase "Here Fido." The explanation for this is more involved than it would seem. Frank says (and why shouldn't we believe him?) that "it's a parody of Wagner in the concept of the leit motif.

"A leit motif is a small fragment, a cell of music – it's not a theme, it's a partial chunk and Wagner would take a leit motif and sprinkle that motif all through the piece and it would have a nostalgic effect and conjure up in a psychological frame, certain responses. Like, for instance, if there's a leit motif for the girl who rides the swan and if there's a leit motif for the swan, when you're in the cave, if you have the motif for the swan sneaking around in the back of the music for the cave, it would imply to the listener that there's a swan in the cave, even though you don't see a swan in the cave. Or if you're in a castle and if the girl's notes come in in the castle and the swan is in chains, it would imply that perhaps the swan is lonely for the girl in the castle. Now on our records, the Fido that keeps popping up is like the swan, so the concept of the Fido superimposed on Situation A is one frame of reference and the Fido in Situation B has another dimension to it. Same old Fido, but he's evolved. And he's happening on another level and so, Fido pops up. But it's an abstract Fido. It ain't a dog. I've used the word dog so many times in so many records, the whole idea of a dog just. ..But it's got nothing to do with a dog. In fact, it doesn't have anything to do with anything. It might as well be a number. It could be a 14." (FZ in What's A Mother To Do?)

"(...)The potential of it reminds me of an historic place in Vienna called the Havelka. It's a coffee shop that has been there since Schubert, I guess, and the main entertainment is newspapers on a stick, and a little classical music in the background, and every known form of coffee and Viennese crullers – little pastry things with some powdered sugar sprinkled on top. This place is so bizarre, because there's not that much conversation, just people reading newspapers on a stick. It's owned by this old woman named Mrs. Havelka, who's been running it since birth, I think, and the walls are covered with things from famous composers and authors who paid their bill by writing "graphic currency." Vienna's funny that way. Apparently Wagner stayed at the Hotel Imperial one time, and to pay his bill he handed over some pages from Parsifal that are still on the wall in the coffee shop." (FZ in The Mother of All Interviews (Part 1))

"The PMRC wants ratings to start as of the date of their enactment. What will be the status of those recordings remaining from the Golden Era prior to censorship: Do they become collector's items or will the government order them burned in a public ceremony somewhere in Virginia? If as they suggest, hearing a certain type of music can cause unwanted behavior, than anyone who has heard a The Beatles or a Beach Boys record is in danger. Those were Charles Manson's favorite groups. Wagner's influence on Hitler is well documented. Shouldn't the PMRC consider a big red "M" for those classical works favored by megalomaniacs? What if statistics become available showing a marked preference for Wayne Newton and Barry Manilow among convicted white-collar felons?"

Den Simms: O.K. Here's something in a completely different direction. Quite often your music contains quotes from Giuseppe Verdi's "Aida", Richard Wagner's "Lohengrin", and Georges Bizet's "Carmen". Are you an opera buff?


Frank Zappa:: No.
Den Simms:: What about those pieces of music appeals to you? You've been playing around with them for years.
Frank Zappa:: They're all good tunes.
[...]
Den Simms: O.K. I'll continue here. The day after that, the solo in "Willie The Pimp" was substituted with [Wagner's] "Flight Of The Valkyrie" going into "Purple Haze".
Frank Zappa:: Right, which was a real utter disaster, because it wasn't exactly the day after that.
Den Simms:: Yeah. Particularly the "Lohengrin". You've kinda had a fancy for that for pretty much throughout your career, haven't you?
Frank Zappa: Yeah. Y'know, I never heard "Lohengrin" until Hi-Fi was invented. Long time ago, before Hi-Fi, I didn't know that there was such a thing called "Lohengrin", and I found out about it because, one day I went to this record store, and they gave away this forty-five RPM demonstration disc of what Hi-Fi sounds like, and that was the thing that was on there. Like, the first Hi-Fi I ever heard was this performance of "Lohengrin", by [Arturo] Toscanini.
Den Simms: And it appealed to ya.
Frank Zappa: Yeah. Nothin' else on there did, but ... (laughter)

–From They're Doing the Interview of the Century, Part 1