Difference between revisions of "Ray Collins" 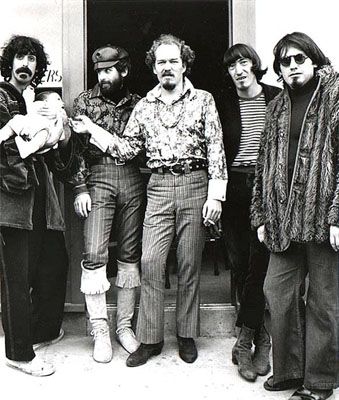 Ray Collins (19 November 1936 - 24 December 2012) was a member of The Mothers. He performed as a vocalist, harmonica player and percussionist.

He started his musical career singing high falsetto backing vocals for various 'pachuco' and doo-wop styled groups in Southern California. He recorded with Little Julian Herrera and the Tigers in 1959. In 1962 he saw Zappa playing guitar with a band at a bar "The Sportsman" in Pomona. Collins, at his request, sang a few songs with the band. He later told Zappa about an idea he had for a song called How's Your Bird?. Zappa went off, wrote the song then contacted Collins to arrange to record the song at Pal Studio.

Collins and Zappa would perform in bars as a mock folk duo called Sin City Boys and Loeb & Leopold.

Ray Collins' description in the liner notes of Freak Out!

... Moved into my recording studio, joined forces with Ray, Jim and Roy, schemed and plotted for a year, working in beer joints, blah, blah, starved a lot, etc... played a lot of freaky music & stayed vastly unpopular (though notorious). OWE OUR EXISTENCE to Mark Cheka for his initial encouragement and sterling example (and to a whole bunch of other people who are going to be bugged because their names aren't listed in detail, with addresses and pertinent facts about what they like about the government & their other fetishes). Ray used to be a carpenter and a bartender and sing with Little Julian Herrera & The Tigers (note the falsetto part in 'I REMEMBER LINDA')... been singing R&B for ten to twelve years. Jim got fired from some idiot band in Kansas, forcing him to move to California. Lucky for us. Seems he just couldn't get turned on playing " Louie, Louie" all night... it must have hurt him deeply when they rejected him. Roy is an asthmatic Pachuco, good-natured excellent bass player, involved in the R&B scene here for about ten years. He is unbelievably tolerant. I don't understand it. Elliot digs the blues. He has a big dimple in his chin. We made him grow beard to cover it up. He just got out of the Army. Lucky for the Army. THEY ARE ALL MUSICIANS.