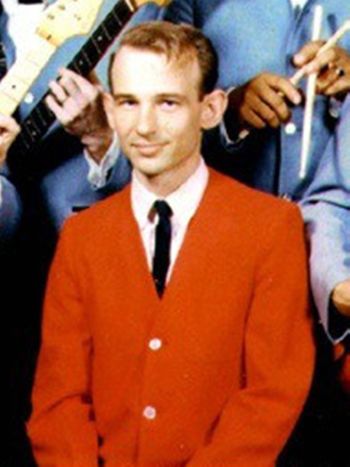 Paul Conrad Buff (24 April 1936 - 14 March 2015)[1] was an American sound engineer, music producer, artist, composer, arranger, multi-instrumentalist and inventor. In the early 1960s he recorded and released numerous surf rock records. He was, at the time, married to Allison Buff.

Paul Conrad Buff grew up in Cucamonga. Joining the Marine Corps, after graduating, he trained in aviation electronics. He returned to civilian life and took a job making parts for guided missiles at General Dynamics. After a few months at the "Bomb factory", as Zappa would refer to it, he was bored with his job so he borrowed $1000 and, knowing nothing about the music business, set up the Pal recording studio in Cucamonga. He worked with groups such as the Surfaris (Wipe Out), The Chantays ("Pipeline"), and many others.

In 1960, Ronnie Williams introduced Frank Zappa to Buff. Paul, Frank, Ronnie, Ray Collins and Dave Aerni recorded a bunch of 7" singles at Pal recording studio between late 1960 and 1963. Buff claims to be the "Godfather of Snorks" and other such early Zappa noises..., although, according to Ray Collins, this title should go to Dick Barber.

Zappa wrote a single named "The Big Surfer", on which a DJ named Brian Lord imitated John F. Kennedy. Buff leased the master tape to Capitol Records for a $700 advance, but because of the song's punchline, which mentioned the Peace Corps in Alabama, Medgar Evers was murdered. Despite already having signed a contract Capitol refused to release the single. [2]

In 1963, Buff got the opportunity to work with Art Laboe at Original Sound in Hollywood where he engineered the Run Home Slow soundtrack recording. By mid 1964 FZ had moved into the Pal Studio and in August FZ purchased the studio from Buff for $1000, his Fender Jazzmaster guitar and a set of drums. FZ recalled (in TRFZB): "In other words, I agreed to take over his lease and the rest of his debt." FZ renamed the studio as Studio Z.

Buff continued to work at Original Sound recording groups such as The Strawberry Alarm Clock and Sugarloaf. He set up Allison Research Inc. to produce and market the studio equipment he had designed. Allison Research flourished and Buff moved to Nashville. Here he became interested in developing photographic lighting equipment and set up the White Lightning company. Over the years this has become a leading supplier of professional photo lighting equipment.

Zappa named Paul Buff in his list of influences in the sleeve of his debut album Freak Out!, under the heading "These People Have Contributed Materially In Many Ways To Make Our Music What It Is. Please Do Not Hold It Against Them"; he is also mentioned in "The Real Frank Zappa Book" (1989) as an "amazing gentleman" (see the chapter "Let's Get Into Show Business").

In Tryin' To Grow A Chin Zappa uses a motif from Paul Buff's The Velveteens single Dog Patch Creeper.

Paul Buff can be heard on fuzz bass on The Lost Episodes, and had a hand in recording the first two tracks on the Mystery Disc.

Quotes by Zappa about Paul Buff

Zappa: "Well, the very first fuzztone that I ever heard about was designed by a guy named Paul Buff, the same guy who invented the Keypex and the Gain Brain and a number of other studio utensils. He has a company on the West Coast now called Valley People. He was also the guy who I bought that first recording studio from ... a real electronic genius. What he did was he plugged an electric bass into a phonograph preamp and then plugged it directly into the board, like a fuzz bass. It was one of the greatest noises I ever heard. Prior to that, if you wanted to distort a guitar, you could plug your guitar into the input on the amp that was supposed to be for microphone. The old Gibson amps used to be able to do that; you'd get some really ugly distortion. But the only other way to get distortion in those days was to slash the speakers."

Back when you bought Pal Recording in Cucamonga, CA, from Paul Buff and turned it into Studio Z, Buff (who invented the Kepex noise gate) was experimenting with some fairly innovative audio equipment. What's the story behind the 5-track recorder that he made?
Zappa: He took a Presto deck and made his own head stack. I don't even remember what kind they were, but he bought a bunch of heads and machined this stack that was about six inches across. And the heads weren't stacked on top of each other, they were staggered, because at the time there was no material that could give you enough insulation between the heads if you stacked them one on top of another. So he has five heads in a row that were erase heads, and then five more in a row that were record and playback, so it wasn't like three distinct groups of heads-it was two distinct groups. Because of this unique arrangement with the heads stacked in a diagonal way, those 5-track masters can't be played on any head other than the original, and it's all worn now.

Where is the 5-track now?
Zappa: I don't know. I lost track of the deck, but the head stack itself is probably in a box of garbage someplace down in the vault.

What other things did Buff pioneer?
Zappa: Well, he had the first fuzztone I ever saw. He had taken the preamp from a phonograph and he was running a Sears-Roebuck bass through it. And it was a great fuzz bass. That was the first time I ever saw anybody do a direct fuzz on a recording.