The Parents Music Resource Center (PMRC) was an American committee formed on May 13, 1985 with the stated goal of increasing parental control over the access of children to music deemed to have violent, drug-related or sexual themes via labeling albums with Parental Advisory stickers. The committee was founded by four women known as the "Washington Wives"—a reference to their husbands' connections with government in the Washington, D.C. area. The women who founded the PMRC are Tipper Gore, wife of Senator and later Vice President Al Gore; Susan Baker, wife of Treasury Secretary James Baker; Pam Howar, wife of Washington realtor Raymond Howar; and Sally Nevius, wife of former Washington City Council Chairman John Nevius. The PMRC eventually grew to include 22 participants before shutting down in the mid-to-late 1990s.

Tipper rounded up a bunch of her Washington housewife friends, most of whom happened to be married to influential members of the U.S. Senate, and founded the PMRC."[1] 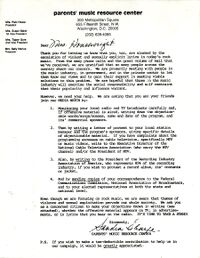 On 19th September 1985 Zappa attended the Senate Commerce, Technology and Transportation Committee hearing to discuss the PMRC's proposal (five of the Committee's members had wives in the PMRC). Zappa was joined by Dee Snider and John Denver. They would all make statements to the committee. Zappa and Snider were concerned that Denver may speak in support of the PMRC's proposals[2] but he spoke against the PMRC and resolutely objected to any form of censorship and likened the proposals to Nazi book burnings. 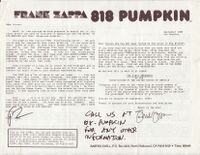 At his own expense Zappa initiated his campaign against the proposed classification of recordings. He distributed the Z/PAC which contained a typical PMRC letter, the letter Zappa had written to the President and the Cashbox editorial piece. As the campaign progressed the contents would vary.