Difference between revisions of "PachygnathaZappa" 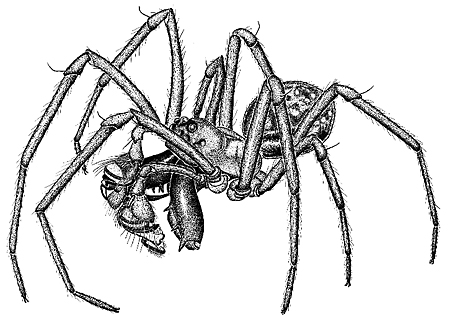 In 1981 and 1983 Belgian biologists from the Rijksuniversiteit Gent organized two expeditions to Mount Cameroon and neighbouring ranges. At various times during the mid to late 80's, the results of their arachnological findings were revealed to the world, but it was not until 1994 (in Zoologica Scripta, Vol. 23, No. 4, pages 325-352) that Robert Bosmans and Jan Bosselaers introduced us to the species they named Pachygnatha zappa.

Not only is Pachygnatha zappa the creature with the most legs named after FZ, but it's also the only one bearing a physical resemblence to the man. As they explain in the paper: 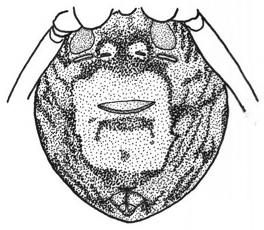 "Etymology. Zappa is a noun in apposition. This species epithet is given in honor of the twentieth century composer Frank Zappa (1941-1993), well known for both his serious and commercial music. The dark grey mark on the ventral side of the abdomen of the female of this species strikingly resembles the artist's legendary moustache (Fig. 69)"

Jan's sketch makes this extraordinary resemblance clear. "I never met Frank Zappa personally, but I was very interested in his music in the seventies and eighties. I saw about ten of his concerts in Brussels." Jan Bosselaers