Difference between revisions of "Nick Venet" 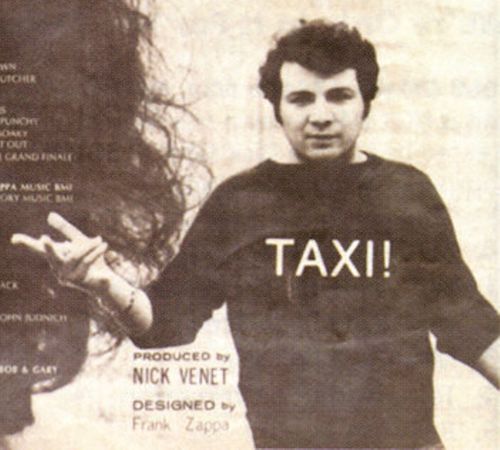 Nick Venet as pictured in the sleeve of The Lumpy Money Project/Object.

Nick Venet (born Nikolas Kostantinos Venetoulis, 3 December 1936 – 2 January 1998) was an American record producer who began his career at age 19 with World Pacific Jazz. He worked as a teenage songwriter in New York's Brill Building along with Bobby Darin and Carole King.

At age 19 he moved to Los Angeles and worked with Lord Buckley before becoming a producer and talent scout with Capitol Records. In 1962 he recorded the Beach Boys after their independently produced "Surfin'" single had been a minor local hit.

He is primarily known for signing The Beach Boys and producing their early material. He would sign many acts to Capitol including The Stone Poneys featuring Linda Ronstadt who had a hit with "Different Drum" written by Mike Nesmith and John Stewart; the latter would write "Daydream Believer" for The Monkees.

By the early 1970's Venet had moved to United Artists Records.

Zappa mentioned Nick Venet in the list of influences inside the sleeve of Freak Out!, under the heading: "These People Have Contributed Materially In Many Ways To Make Our Music What It Is. Please Do Not Hold It Against Them".

Nick Venet later produced Frank Zappa's Lumpy Gravy, originally commissioned for Capitol Records, but due to contractual problems it would eventually be released by MGM.

Frank Zappa:: "Alright, let's see. It was, uh ... '66. This guy named Nick Venet, who was a producer at Capitol, came to me, and offered me the chance to write something for a forty-piece orchestra, to do a recording of that kind of stuff. I looked at my contract with MGM, 'cause we were signed with MGM at the time. Nowhere in my contract did it preclude me from being a composer, or a conductor. So long as I didn't perform on an album that was released by another company, I didn't think I had a problem."

Den Simms:: By "performing", you mean something with an instrument.

Frank Zappa:: "Nonetheless, MGM refused to allow this album to be released, and there was an argument over it for a year, finally resulting in MGM buying the master tape from Capitol, and then, I added the vocal parts in there, and it came out. [s] But in '66, I used to live in this little house on Kirkwood, and I was renting this place, and this right about the time Venet offered me this opportunity to write this music. I thought "Whoa! This is fabulous. I'll just dive in there and start composing my little buns off, and I'll get this performance." Well, shortly after receiving this commission, the landlord notifies me that his son, who is a dentist from the Midwest, is moving back to California, and we should get out of the house, so he can have his son move in. So, I got evicted. I have to move. I've got a deadline to do the recording session, I've got all this music to write, and I've got no place to do it. So Lumpy Gravy, all the music to that was written in these locations: the office adjoining Nick Venet's office at Capitol Records, after six PM, 'cause they had a little piano in there, and I would go down there, and work in there for a few hours; then I wrote part of it at the Tropicana Motel, with no piano, because we had to live there; and then, um, I took a short-term rental on another house in the Canyon, just prior to the recording sessions, and I was writing around the clock, and I had copyists coming over there at three o'clock in the morning and pick up chunks of the score, and go off, and copy the parts."

- Quoted from They're Doing the Interview of the Century, Part 2 by Den Simms, Eric Buxton and Rob Samler, Society Pages, June 1990.