Difference between revisions of "Meredith Monk" 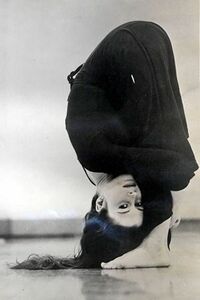 "We were playing at the Garrick Theater and I was reading the paper... the "East Village Other". I saw a picture of her and she was like bent in half. She was looking at the camera with her head near her feet. It said "Meredith Monk Dance Concert". This was the 1st dance concert she ever did... other than in college. Meredith monk I got Roy (Estrada) to come with me to this dance concert. She did 2 pieces... one was called "16 Millimeter Earrings", and the other piece was called "Yellow Piece". I was totally blown away at her. I couldn't believe it. When it was over, I went over and talked to her and told her who I was. She gave me her phone number and we started going out a little bit. Eventually we started living together. We stayed together for about 8 months." [1]

She opened for the Mothers at The Garrick during July 1967 with Don Preston backing her on keyboards. They recorded a piece called Candy Bullets And Moon which they issued as Aunt Jamina and the United Pancakes (DWR 6806) which was later reissued on the John Giorno Giorno Poetry Systems compilation Better an Old Demon Than a New God, {GPS 033) . She also contributed to A Chance Operation and can been seen in the film Uncle Meat.