Difference between revisions of "Marshmoff" 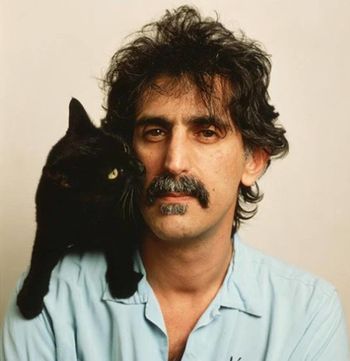 Marshmoff was one of Frank Zappa's black cats. The name was thought up by two-and-a-half year old Diva Zappa, apparently as a synonym for the word mushroom.[1] [2] [3]

Zappa poses with Marshmoff on his shoulder on the cover of London Symphony Orchestra, Vol. II.

"There's the legendary Marshmoff, the black one that sits on your shoulder and drools. [laughter] She is now commuting between our house and somebody else's house, and she occasionally comes over and drools all over the place. And then there's two black and white cats. One's named Spot, which is a male, and that's one of the reasons Marsh Moff isn't here so often, because Spot's been chasin' her out." - Frank Zappa in They're Doing the Interview of the Century, Part 2.