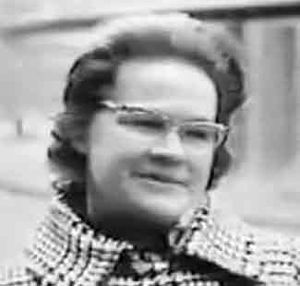 Marion Herrod was the letting agent and secretary for the Royal Albert Hall in London. She was responsible for the banning of the 200 Motels concert at the hall on 8th February 1971. [1] [2]

"(...) we booked a concert at the Royal Albert Hall, listing the initial rehearsals as rehearsals for the concert -- all completely legal. If, however, the concert were not to occur, the production company (my company) would then have been liable for a massive payment to the union for 'extra recording sessions. A spinster (her descriptive title in the court documents) named Marion Herrod took it upon herself to cancel this sold-out concert at the last minute, after hearing from a trumpet-player friend in the orchestra that the song lyrics were 'obscene.' (One of the objectionable words was brassiere.) Her action, on behalf of the Crown (her employer), caused substantial and demonstrable financial damages from the concert (as the ticket money had to be refunded, along with the concert preparation costs) and from the potential balloon payment to the musicians' union."