Les Paul (June 9, 1915, Waukesha, Wisconsin, USA - August 12, 2009) was an American jazz, country and blues guitarist and inventor. He is credited with experimenting with overdubbing, delay effects, multi-track recording and developed the Les Paul guitar brand. He also hosted his own radio and TV show, The Les Paul Show.

The Les Paul guitar brand has been used by various rock musicians over the decades, including Paul McCartney and Frank Zappa. 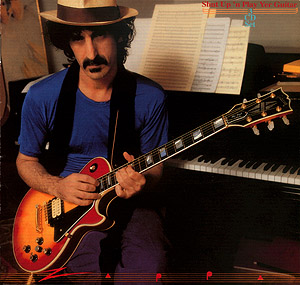 Zappa holding a Les Paul guitar on the cover of Shut Up 'n Play Yer Guitar.

Talking about Paul Buff in The Real Frank Zappa Book (1989), FZ mentions Les Paul: "He built his own homemade, five-track, half-inch tape recorder -- at a time when the standard in the industry was mono. (I think only Les Paul had an eight-track then. Buff was able to overdub the same way Les Paul could, but in a more primitive manner.)"