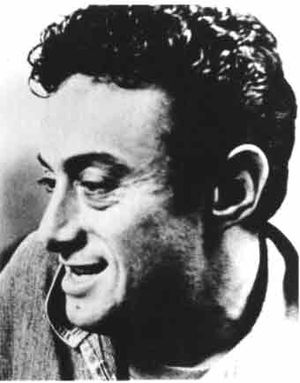 Bruce is discharged from the army for wearing women's clothing in 1945. He held various jobs while studying acting in New York. An appearance on the Arthur Godfrey Talent Scouts television show (October 1948), performing standard comedy routine, brought him national attention. The next few years were spent - as a stand-up nightclub entertainer - at numerous comedy clubs across the country refining what became known as "sick comedy" routines: his scatalogical and sardonic humour was alternatively called obscene and "radically relevant". In 1959 appeared on the Steve Allen TV show reaching a national audience.

March 12, 1963: Bruce sends a telegram to the judge in the Gate of Horn trial, Judge Daniel Ryan, accusing him of "illegal, unconstitutional, and most fascistic...behavior" for trying him in abstentia.