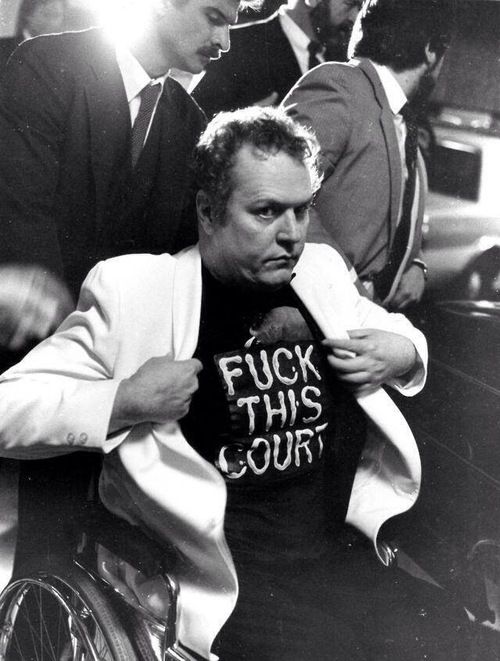 Flynt was also one of the most outspoken defenders of freedom of speech. He took part in several legal battles involving the First Amendment, and has run for public office a number of times, including a bid for the 1984 U.S. presidential elections.

In 1997 his life was turned into a Hollywood biopic, The People vs. Larry Flynt, directed by Milós Forman, with Woody Harrelson portraying Flynt.

In 1984 Flynt offered several people the opportunity to do a photoshoot in Hustler. Zappa was one of them. Zappa had photographs made for the album sleeve of Thing-Fish, with Flynt's financial support. Sergio Albonico took the pictures, with Annie Ample posing as a model.

In January 1984 Zappa was interviewed in Hustler, where he expressed his support for Flynt in an article It's About Mr. Flynt. [1] Flynt at the time had just lost a court case where Kathy Keeton had sued him over a satirical cartoon in Hustler. [2] [3]

"Frank was a genius, a rebel," Flynt said. "And Frank and I in all our conversations had a very honest dialogue. We were never really out of sync politically or socially. There were always things to talk about, but never really anything to argue about." He hesitated, then added, shyly, "Frank really, really liked me a lot." "Frank loved Larry!" Gail interjected. "Frank and Larry were kindred spirits." [6]

Flynt is one of the people receiving thanks for their "very special but no less significant contributions" in The Yellow Shark liner notes. [7] He is also mentioned and thanked in the liner notes of The MOFO Project/Object. [8]