Difference between revisions of "Keith Moon" 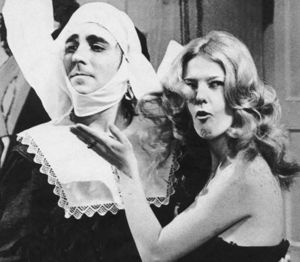 Keith Moon was the drummer of rock band The Who. In 1971 he appeared in a cameo role in Frank Zappa's film 200 Motels, acting in drag as a nun who was fearful of death from overdosing on pills.

Moon had a reputation for being highly destructive. He laid waste to hotel rooms, the homes of friends, and even his own home, often throwing furniture out of high windows and damaging the plumbing of hotels on The Who tours with fireworks. At Moon's 21st birthday party, at the Holiday Inn in Flint, Michigan, he drove a car into the swimming pool. An incident which caused The Who to be distanced from Holiday Inn venues thereafter.

Keith Moon died of an overdose of Clomethiazole (Heminevrin) pills, a medication he was taking as part of a programme to wean him off alcohol.

Referenced in We're Turning Again, in the line: "We can laugh at Keith Moon's jokes."

Keith Moon was also mentioned and thanked in the liner notes of The MOFO Project/Object (2006) album. [1]