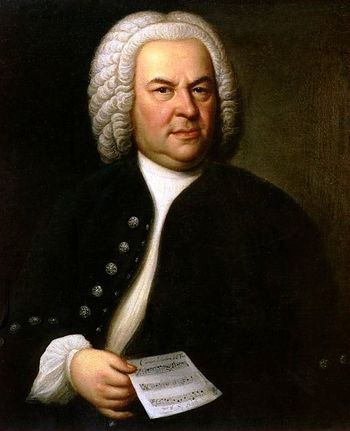 Johann Sebastian Bach (31 March 1685 – 28 July 1750) was a German composer, organist, harpsichordist and violinist. He is globally seen as one of the most important composers of all time. He is admired for the intellectual depth, technical command and artistic beauty of his works, including famous compositions such as "The Brandenburg Concerto's", "St. Matthew Passion", "St. John Passion" and "Toccata and Fugue in D minor" to name just a few.

"Bach is more interesting. (...) I just like the way it sounds. The same reason I like Varèse. I like the way it sounds. But I wouldn't go out of my way to attend a Bach concert or buy an album of that kind of music. To me, of that period, that is the most tolerable of the material to listen to. I don't start getting interested in so-called classical music until the early 20th Century." (Frank Zappa in The Mother Of All Interviews (Part 2)

"I haven't studied Bach, and I'm really not that crazy about his music. I don't hate it, but it's not something I would go out of my way to listen to. I respect it and I realize there's a lot of terrific math going on there and it works, which is the best thing about it. And out of all those old guys, I'd probably be more disposed to his music because of the logic that's involved in it than I would to Beethoven or Mozart. I don't really care for those guys." (Frank Zappa, 84/11)

"But his self-deprecation was deceptive. He talked about fooling around with music, not letting you know how deeply he was into Bach, Mozart, and the classic tradition." (Daniel Schorr in Zappa, City paper, 94-1)

"As we got into talking about it, I realized this man knew an enormous lot about Bach, Mozart and the classic tradition." (Daniel Schorr about Zappa in Frank Zappa, Musician, February 1994)

"lf you know where the melody is going to go, how long it takes to get there and what it's going to do when it gets there, then why bother to listen to it," he says. He makes an exception of Bach, but only if it's played by Glenn Gould, because he "twists the stuff so that at least there's a question mark inserted into the composition". Gould's "mutation" renders it tolerable for Zappa to listen to." (Nigel Leigh in Zappa Plays On)

Nigey Lennon also confirms in Being Frank - My Time With Frank Zappa that Zappa appreciated Bach.