Difference between revisions of "James Brown" 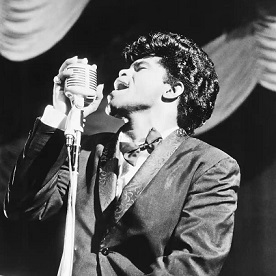 James Brown (3 May 1933 - 25 December 2006) was an influential and popular American soul singer and bandleader.

He is most famous for his highly energetic live performances and many catchy hits including "I Feel Good (I Got You)", "Cold Sweat", "Papa's Got A Brand New Bag", "It's A Man's, Man's, Man's, Man's World", "Say It Loud: I'm Black And I'm Proud", "Sex Machine", "Funky Drummer", "Get Up Offa That Thing", "Get On The Good Foot" and "Livin' In America". He was a huge inspiration for several funk, dance, rap and hiphop groups and artists and holds the record of being the most sampled musical artist in the world.

Zappa named Jimmy Nolen (who would later play guitar in James Brown's band) one of his influences.

Some sources have erroneously claimed James Brown is depicted on the cover of We're Only In It For The Money. However, this person is Willie Mae Thornton.

During many of his early 1970s concerts Zappa often used the phrase "Ain't It Funky Now?", as can be heard on Piquantique and Room Service. "Ain't It Funky Now" was a phrase Brown often used in his songs. Zappa and Brown were similar bandleaders in the sense that they both used hand signals to conduct their bands and ordered their musicians to play their songs exactly. Brown even fined his band members if they played a wrong note.

- Frank Zappa in The Mother of All Interviews (Part 1).