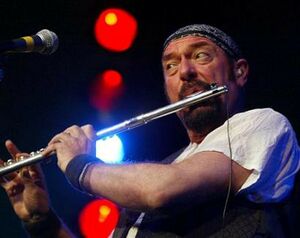 Ian Anderson (August 10, 1947) is a British singer, songwriter and multi-instrumentalist, best known for his work as the leader of British rock band Jethro Tull.

Anderson named Zappa as one of his heroes, along with René Magritte and Jeremy from Aeroflot. [1]

Anderson: "It didn’t upset me particularly when Johnny Rotten lumped Jethro Tull together with a bunch of other things that he despised at the time. In recent years I’ve heard he says “Aqualung” is one of his all time favourite records, so who knows? It upset me more in the early ’70s when Frank Zappa said he didn’t like us. I was quite a fan of Zappa’s music, I admired and revered him as a contemporary, and yeah, having him turn around and suddenly slap us down obviously hurt a little bit. It made it that much more difficult a few years ago when I got a message from his son saying that Frank, who was terminally ill at the time, would really like me to call him and left me his home phone number. I sat and looked at this number, I even dialed it a few times and hung up, because I just didn’t know what you would say to a dying man, especially one who was on record as not liking my work. But I wanted to speak to him, I just found it really difficult. Then I heard on the news one day that he’d died. I felt a profound sense of loss and deep regret that I had never made that call. I would have liked to have spoken to him, just for a minute." [2]