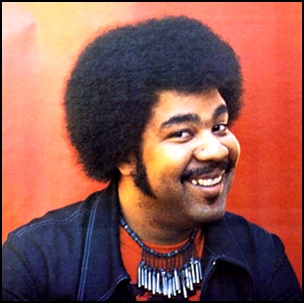 George Duke may be most fondly remembered as the lead vocalist on Inca Roads. In many interviews he thanked Zappa for freeing him from his snobbish and serious attitude towards music. He is also the voice of Greggery Peccary, albeit highly sped up. [1].

George Duke was a prominent solo artist. On his album Feel (LP, BASF MC-25355, October 28, 1974) Zappa plays guitar on the tracks "Love" and "Old Slippers" under the pseudonym Obdewl'l X. Duke covered Zappa's Echidna's Arf (Of You) and Uncle Remus on his album The Aura Will Prevail (LP, MPS MC25613, 1975). On his album I Love the Blues, She Heard My Cry (1975) former Zappa band members Janet Ferguson, Bruce Fowler, Tom Fowler, Emil Richards and Ruth Underwood all have guest appearances. On his next album Liberated Fantasies (1975) Ruth Underwood and Emil Richards returned as guest musicians, alongside Napoleon Murphy Brock. Cal Schenkel designed the album cover, while Herb Cohen managed the record. Richards also provided percussion on Duke's album From Me to You (1977), while Murphy Brock also sang on Duke's albums Don't Let Go (1978) and Follow The Rainbow (1979), Master of the Game (1979). On Dukey Treats (2008) Murphy Brock and Vinnie Colaiuta perform.

George Duke was mentioned and thanked in the liner notes of The MOFO Project/Object (Fazedooh) (2006) album. [2]