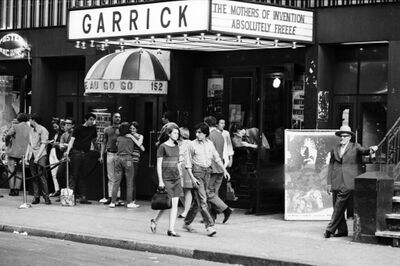 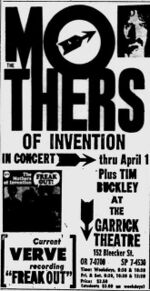 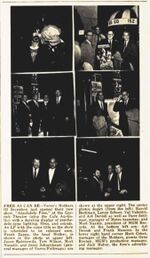 With the reduction in the number of venues available to play in Los Angeles and having had a run of successful shows in New York's Balloon Farm throughout November and December 1966 the band returned to play at the Garrick Theatre, a small, narrow, 199 seat, performance space/cinema located on the floors above the Cafe Au Go Go, at 152 Bleecker Street, New York. This covered the Easter vacation period Thursday 23 March to Monday 3 April 1967.

“We had to get out of California because we couldn’t get much more work there and on the East Coast there was a lot of opportunities to do so. There were so many big cities within a two-hour drive from New York and we had a contract to play at the Garrick Theater in Greenwich Village for two weeks over the Easter holiday.”[1]

With so many visitors around during the holiday period the shows had been very successful with weekends having three performances to accommodate the demand. Given this success Cohen and Zappa decided to rent the theatre for the summer from March 23rd to September 5th. The show, occasionally entitled Pigs & Repugnant, evolved into extended musical pieces interspersed with Dada, vaudevillian theatrics. But attendance declined with, on occasions, more people on stage than in the audience. Towards the end of May it was decided to re-launch the show as an off-off-Broadway revue[2] entitled Absolutely Free to tie in with the release of the album. For the launch MGM and Verve executives were called in as support[3], despite Zappa's claim that the album and show having the same name was a mere coincidence,[4] and the press invited to review the show:

Their music is also, more often than not, frankly hostile – both in its headachey volume and in those lyrics that you can make out amid the roar... As pure sound, though, this approaches genius. From an electrified kitchen of percussion, saxes, guitars, flutes, etc., they produce a thick, black sound shot through with odd treble sunbursts and pinwheels – the exact aural equivalent of the nervous ever-changing abstract projections flashing on the screen behind them.[5]

"For the Mothers, which we might loosely call a rock and roll group of seven males, are wildly hirsute, sartorially shaggy and arrogant of posture. (If that brings to mind the Beatles, try to think more in terms of the Hell's Angels without their bikes.) Visual chaos is compounded by the projection of throbbing patterns on a huge screen behind the ensemble and by such distracting (and annoying) on-stage antics as smearing a banana on a dismembered doll torso....The Mothers of Invention aren't going to change your mind. But they are part of a social phenomenon, they are good at what they do, and an evening at the Garrick is emphatically instinctive. Maybe more."[6]

Gail Zappa likened the extended run at the Garrick to The Beatles in Hamburg[7] in that they were afforded the time to work out what they wanted to do and experiment with the audience to establish how much they could get away with on stage.

"New York weather in the summertime is pretty disgusting. Sometime around the first of June, the air conditioner died and the owner of the theater (David Lee Roth's Dad, I'm told)[8] decided that it would be too expensive to fix it."[9]

"During their stay in New York, the Mothers successfully performed for six months at the Garrick Theatre doing a cleverly animated, pornographically delightful musical review. Some people liked it so much they came back repeatedly. Two Long Island school boys, affectionately dubbed Loeb and Leopold, held ticket stubs for some sixty-five performances. A classic study in compulsive behavior. But there were those who reacted rather violently to the show. One flaccid matron was sure that the Mothers were secretly anti-christ Commie swine bent upon polluting crew-cut American pubertines. Here authoritative observation was made on the basis of one evening's performance (to the tune of $3.50)." [10]