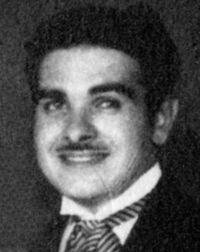 As recorded in the 1930 US Census, he was living at home with his parents aged 24 along with his 17 year old brother Sedio Zappa. In the 1940 Census he is living with his wife Rose Marie Colimore at her parents house. Both homes are in Baltimore. He is listed as Frank Zappa in both censuses.

Francis Zappa, whose musical ability extended to playing "strolling crooner" guitar, was a scientist with a degree from the University of Chapel Hill, North Carolina. He worked at various times as an analyst, engineer and metallurgist for the Lockheed and Convair aircraft corporations. His occupation required the family to move to Florida in 1944 and back to Maryland in 1946, to Edgewood beside the Aberdeen Proving Ground. He was then employed at the Naval Research Center & School in Monterey in 1951 and he and his family relocated to Pacific Grove, California.

Francis Zappa on the album cover of "We're Only In It For The Money".

He can be seen on the cover of We're Only In It For The Money, on the far left, above a skull and below the first Zappa dummy from the left.

Zappa dedicated a chapter of The Real Frank Zappa Book to him.