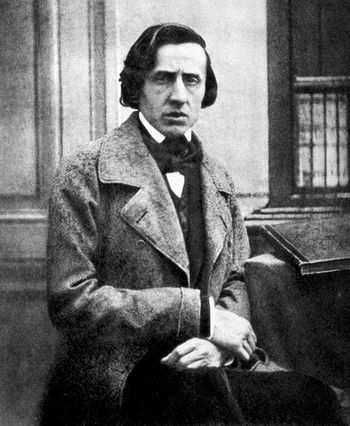 Frédéric Chopin (March 1, 1810 - October 17, 1849) was a Polish composer, pianist and music teacher. His entire work involves the piano and is technically demanding. He is best known for his "Études" and "Marche Funèbre" (Funeral March).

Zappa quoted from the "Marche Funèbre" in Rhymin' Man, Yo Cats and Why Don't You Like Me?. During the Wonderful Wino version on the BTB album At The Circus (1992) the composition was quoted again.

In The Frank Zappa Interview Picture Disk, pt.2 (1984) Zappa mentioned he brought music cassettes of Purcell with him, along with other favorite composers: "Well, what I do is I take cassettes with me on the road because sometimes you're sitting in the hotel room and you just want to listen to something, but what I take is not rock and roll. I like Chopin, I have Purcell, I have Webern, I have Varèse, I have Bulgarian music. I don't listen to rock and roll."