Flo & Eddie are Mark Volman (19 April 1947, Los Angeles, CA) and Howard Kaylan (born Howard Kaplan, 22 June 1947, the Bronx, New York City, NY). Kaylan is related to Herb Cohen.[1] Due to ongoing legal wrangling with their record company they were prevented from using the name of their former band, The Turtles, or even using their own names if working in a music related position. They therefore adopted the names The Phlorescent Leech, shortened to Flo, and Eddie.

They had known Zappa since the mid-1960s; they lived in Laurel Canyon on Lookout Mountain Avenue and were part of that community. They joined Zappa as vocalists in 1970 having attended the Pauley Pavilion concert:

"Somewhere in that mass of spectators were Mark Volman and Howard Kaylan, a.k.a. Flo & Eddie. They came backstage after the show, said they liked it, and told me that the Turtles had split up and they were looking for something to do. The rest is history. We worked together for about two years after that on several albums and tours as well as the film 200 Motels."[2] 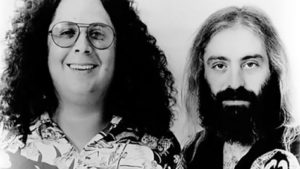 Moving to California as a child Kaylan had met Volman at school. Volman joined Kaylan's band The Nightriders which soon evolved into The Crossfires. They then became The Tyrtles, adopting the then trend of misspelling as in The Byrds and The Beatles, but this name was soon replaced by The Turtles. They had early success with a recording of Bob Dylan's "It Ain't Me Babe" in 1965 and two further hits in 1966. In 1967, when The Turtles were performing in New York, they would, after their show, join the audience at the Garrick Theatre to see The Mothers.[3] Their 1967 single "Happy Together" was so successful it knocked The Beatles from the number one spot in the US charts. They had recruited Chip Douglas as their new bass player, from The Modern Folk Quartet (also managed by Herb Cohen), but he was soon to leave to become the producer for The Monkees. He was replaced by Jim Pons, from The Leaves, who followed Flo & Eddie into The Mothers in 1971. 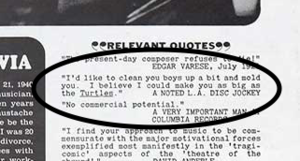 In his film, My Dinner with Jimi, Kaylan recounts how, at the height of their success with The Turtles, they sought advice from Zappa about avoiding being drafted into the army. He advised them to ask Herb Cohen. Successfully using Cohen's advice they were able to continue performing and toured in England were they met The Beatles and Jimi Hendrix.

Their tenure with Zappa was short-lived as after he was injured at the London's Rainbow in December 1971 the band was dissolved. Flo & Eddie decided to continue working as a duo and released the album The Phlorescent Leech & Eddie in 1972 using former Mothers Don Preston, Jim Pons and Aynsley Dunbar. This was followed by "Flo & Eddie" (1973) and "Illegal, Immoral and Fattening" in 1975. In 1976 they were the opening act for Zappa at a concert in Detroit. They continued to record and worked as backing vocalists on numerous recordings during subsequent decades.