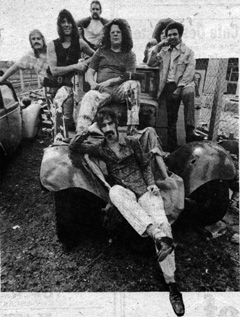 It's the Frank Zappa show ... starring Larry The Dwarf with his guests Suzy Creamcheese, Ruben Sano, and Willie The Pimp.

That's what I like about Zappa, although his music is probably the most complex music accepted by the pop market, there's always that element of perverted humour and frivolous absurdity.

Before Alice Cooper "discovered" outrageous stage antics, the Mothers were doing it with so much more finesse. On one live gig, they tossed a 15-foot long facsimile of a penis into the audience in New York. The crowd fondled and played with this balloon. when suddenly whipped cream ejaculated all over the place, causing a right mess. (How do you explain that to your parents upon arriving home?)

So it was no surprise when the Mothers were banned from playing their "200 Motels" score at London's Albert Hall last autumn. General manager Frank Munday, said he placed the ban because of the obscene four letter words, before resorting to that immortal phrase "no comment". Their last London performance was at the Rainbow last December, when a jealous male pushed Zappa into the orchestra pit 12 feet below the stage, knocking him unconscious and breaking his leg.

Since that time, fearless Frank has been recuperating at his home in Los Angeles and slowly getting back into the swing of things. He's been putting together a new movie, a nine piece group called Ruben and The Jets, as well as completing his latest solo offering, "Waka/Jawaka". Zappa breaks his eight-month silence in the interview below, revealing details of his 20-piece rock orchestra which will appear with him at London's Oval on September 16.

What were you doing after the time of your accident?
I spent a month in the hospital with a cast on my leg in a wheel chair. Then I spent a lot of time hobbling around on crutches before they replaced the cast with a leg brace. I'm still wearing the brace and just recently I've been able to walk around without using the crutches so much. "Waka/Jawaka" was made in the studio while I was still in the wheel chair.

What group will you be bringing to England?
It's a group you've never seen before – 20 pieces including six reeds, six brass, two concert percussionists, one drum set, one electric bass, two guitars, keyboard and synthesizers, and an electric cello. It's really nice. The only names people will recognise from past associations will be Ian Underwood on keyboard and Ruth Underwood playing percussion one. Most of the people who are on the 'Waka/Jawaka' album are in this group. We'll probably be billed as The Mothers. As far as recording goes, the next album will feature performances by the big band.

What songs will your repertoire feature?
We have an advanced arrangement of "Big Swifty" from the "'Waka/Jawaka" album which we'll be playing. As far as older, better-known material goes, we'll be doing "Penis Dimension", "Dog Breath Variations", "Uncle Meat" and "Revised Music For A Low Budget Symphony Orchestra".

What we really have here is an electric symphony orchestra. Aside from the recognisable pieces which are rock-oriented, there are two or three semi-symphonic-type pieces, which are of a humorous nature simply because of the subject matter. But we're not going to have people jumping around on stage or falling down with tambourines and saying zany stuff – we're not supplying that this season.

Did "200 Motels" turn out to be the kind of picture you wanted it to be? Were you satisfied with the results?
Within the scope of the budget that we were given, I'd say I got maybe 40 to 50 per cent of what I wanted to get out of it. You just have to kiss the rest of it good-bye because there's not enough time or money to do it perfect. I'm working on a new picture which we are casting for right now, although I don't want to talk to much about that.

Have you any plans to bring out the nine album set you were promising?
I was promising it, but Warner Brothers backed down on their promise of releasing it, so I'm not going to argue with them. I just don't think they would do a good job of selling it for me, so I don't see any reason for putting it out and letting them squat on it.

Do you think you'll ever make another early r and b album like "Ruben and The Jets"?
As a matter of fact, one of the projects I've been working on for the past few months has been assisting in putting together a real Ruben And The Jets. If there's another album like that, then they'll make it, not me.

You've been quoted as being an anti-drugs man. Do you still feel that way?
I still feel strongly about that, but I don't like to talk about it because it appears that the idea of using drugs for the sake of recreation has become a partly-established social concept that I don't personally identify with. I don't find it to be socially productive. But I don't find it to be any less productive or any more destructive than getting completely out of your mind on alcohol. So, I just keep my mouth shut about it.

Have you any particular method of writing music?
What I do is: when I get up in the morning, I know that there's a certain amount of work that I have to do that day in one of five different fields. So if I get up one day and I have to write lyrics, I go downstairs and I sit at the typewriter and I write. And when I finish with my work at the typewriter, I feel glad that I got my work done at the typewriter. The next day, if I have to come back and write the music to those lyrics, I sit at the desk and pick up some pieces of paper with funny lines on it. And when I'm done with that, I'm glad I'm done with that. And the same thing goes for all the other things – I just take them as they come along.

That sounds very academic.
Well, that's honestly the way I feel about it. I don't write things unless I feel like I've got something to say. I'll wake up one day and think of a good idea for a song, and then I'll go down and do that. There's a lot of different kinds of tools that you need to use for these various jobs. I enjoy doing all those things and I try to do them as best I can.

Would you like to comment on the Howard Kaylan/Mark Volman split?
I would say that the press releases they put out are involved with their own promo as a group and have been very unfair in terms of the conditions under which the group disbanded.

Their attitude comes down to an extreme interest in money. The main thrust of all that press material is geared to exploiting them as new artists and partly due to the record company's interest in selling their records. Apparently, they believe it's ethical to do it at my expense.

I'm extremely disappointed in their behaviour, because there was a time when I thought they were my friends.