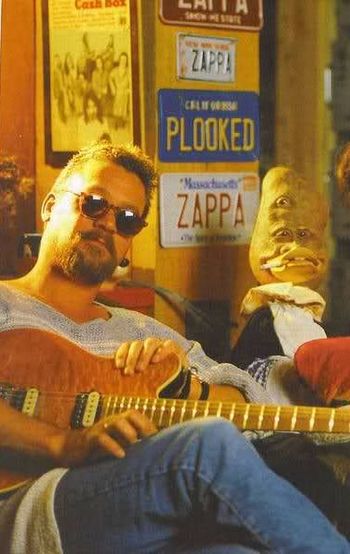 Eddie Van Halen in Zappa's house, photographed during an early 1990s interview by Dweezil Zappa for an unidentified guitar magazine.

Eddie Van Halen (Amsterdam, The Netherlands, January 26, 1955 - Santa Monica, California, 6 October 2020) was a Dutch-born, American rock singer and guitarist. He was best known as the lead guitarist of the band Van Halen. He also played the guitar solo on Michael Jackson's song Beat It.

As a junior in Pasadena City, California, Van Halen followed scoring and arranging in a class by Dr. Fischer, whom Van Halen claimed had also been a teacher to Frank Zappa. [1] Originally Van Halen wasn't a fan of Zappa. In a 1982 interview he claimed that Zappa's guitar playing "doesn't move me. It sounds typewriter-ish, though I don't want to knock the guy." [2]

Steve Vai met Van Halen backstage at an Allan Holdsworth concert at the Roxy in 1982 and told him he played with Zappa. When Van Halen wanted to meet Zappa, Vai gave him his telephone number. Later on Vai and Van Halen had a jam session at Zappa's house and also listened to Van Halen's recent album Diver Down (1982).[3]

Van Halen was a personal friend of Dweezil Zappa. Van Halen taught him many guitar licks and produced Dweezil's debut album too.

Originally Van Halen would have inducted Frank Zappa in the Rock 'n' Roll Hall Of Fame in 1994, but he turned down the offer, because he never did those kind of things. (See: Zappa Inducted Into The Hall Of Fame).

Eddie Van Halen was mentioned and thanked in the liner notes of The MOFO Project/Object (2006) album. [4]

Quotes by Zappa about Van Halen

"There's no reason why someone shouldn't break out of the Van Halen mode. If you keep playing that way, you're always going to be assured of work." - Absolutely Frank, Non-Foods, Absolutely Frank: First Steps In Odd Meters, 1982.

"Eddie Van Halen is a good guitar player, you know, he's entitled to all of the adulation that he can acquire. That's great." - Frank Zappa, 82/03, Frank Zappa On... The '80s Guitar Clone.

Do you play any of this Eddie Van Halen harmonic stuff on the other side of the nut?
"Oh, I can. But everybody now is specializing in that. It's the new hip thing to do ... including my son Dweezil. He's very good at it. Steve Vai taught him a few of those tricks. It's a nice sound, but it sounds so much like a gimmick. It's so freeze-dried because it's such a customary modern-day fuzztone syndrome, which is not part of my musical language. It's something that I can appreciate if somebody else does it, but it's not me." - Frank Zappa: Guitar Player

As you said you don't listen to popular music so I don't expect you know Eddie Van Halen.
"I do know Eddie. He comes over to the house because he hangs out with my son."

I see. But do you know him as a guitar player?
"Oh yeah. He and my son play together and he's fabulous, but there's another guy who shouldn't use drugs." - The Frank Zappa Interview Picture Disk, pt.2.

Frank Zappa: "I don't do all the 1980s guitar noises. Unfortunately, the audience for guitar playing has a real narrow interest span. If you don't sound like Eddie Van Halen, then apparently you don't actually play guitar any more. I have no intention of ever sounding like Eddie Van Halen, and, uh, it makes you wonder why you would even bother to play the guitar, because the current audience would listen to it and go, 'That's not a guitar. It doesn't go wee wee wee wee, wee wee wee wee.' " So why do it?"

Dweezil would probably rebut that, what with his own infatuation for Ed Van Halen.
Frank Zappa: "I'm not saying anything against Eddie because I think what he's done for the guitar is wonderful. But the thing that's tragic about, the marketplace' is that everybody decided that they were all going to do that, and then the competition is not musical. It's gymnastic. Okay, they say, "'I want to sound like Eddie, but in order to be better than Eddie I have to be faster than Eddie." That seems to be the aesthetic operating procedure in the marketplace. Meanwhile, Edward probably sits back and goes, "These guys are really stupid." Because I don't think that's what he had in mind when he developed the style."- Zappa's Inferno

I don't want to leap to the defense of the press because I don't respect a lot of it. On the other hand l wrote an article recently in which I suggested that Edward Van Halen might have stagnated with his band, and his manager called me and up and called me a "no-good motherfuckin' kike."
Frank Zappa: "Oooh! Nice man! I hope you ran that!"

We did, and we received a lot of mail. Not that I needed anymore convincing, but that was a confirmation that ...
Frank Zappa: "People are listening! I'm telling you, that's the influence ... The worst thing that can happen to a person who is an MTV-size "star" is for somebody to write they're not hot. I mean, [smiling] stagnating is not very hot. And that's a career-crunching thing, especially to apply to somebody who's playing hot guitar solos. To even imply that – you can imagine the manager going, "My 15 motherfucking percent, it's goin' up in smoke! That little kike! The motherfucking kike! I gotta call him now!" [laughs] I don't even know this guy, but I just hear that ratchet going."

Now, how culpable is the press there? I feel it's that Edward Van Halen is being constricted by somebody who would rather not see him go off and do a progressive power-trio record.
Frank Zappa: "Well, let me set you straight on a couple of things that I see slightly differently than you do, partly because I'm 50 years old and you're not – and I don't want to sound like grandpa. But to reinforce the negative side of the activities of the press: I lived as an entertainer through one era of rock 'n' roll where the rock press was absolutely the blowboy of the industry. In the '70s, when corporate rock really blossomed into this stinking apparition it became, companies were giving cocaine, girls, money, junkets and all this stuff to famous rock writers, just greasing them from one end to the other so they would write nonstop, wonderful glowing articles about groups that needed to be promoted. It was pure grease, okay? I detect from the way that this interview is going that you have a little bit more integrity – a lot more integrity – and more of an intellectual edge to what you're trying to do than the people I had to talk to in the world of rock in the last 25 years. I mean it as a compliment, I'm not trying to stroke you or any thing. I find it refreshing to talk to anybody connected with a music magazine – whether he's a little motherfuckin' kike or not [laughter] – who has an idea of the relationship between music, the industry and the realworld. Because most interviews you do, people are just talking about ... nothing. No-thing! I put up with that for too long. And it wasn't until 1985, when I went to Washington to testify in front of the Congress, that I started having the chance to talk to people in the press who were not from rock 'n' roll, just regular writers, who were intelligent, normal human beings. I started doing fewer rock interviews, and my attitude toward the press changed at the moment where I didn't have to do so many conversations with the people who determined whether or not you were hot. The world of hot – I don't give a fuck about the world of hot. And that's all they care about in that world, okay? So I wouldn't be too quick to defend the rock press because of its rather ... checkered past. And it may have evolved, and it may have matured, might have even been perfected by now, who knows? I don't read it any more. But if you're any example of what's out there in terms of rock interviewers, I'm gratified. Especially if you're going to get a call like that from Eddie Van Halen's manager, you must be doing something right." - Poetic Justice