Difference between revisions of "Dweezil Zappa" 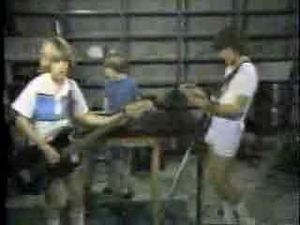 Dweezil Zappa is Frank Zappa's second child of four, first son, born September 5, 1969. He is a musician having played guitar from an early age. As a 12 year old he was rehearsing in a band called Fred Zeppelin.

When Dweezil was born, Gail decided to have 'natural childbirth.' At that time, the only hospital in Los Angeles that would allow this process to occur with a Dad in the delivery room was Hollywood

When it was time for the Big Delivery, we experienced a slight delay -- we had to fill out a mass of papers before they'd let us in, riddled with irrelevant questions like: "What religion are you?"

That was the first thing that upset the admitting nurse. The second thing to spoil her afternoon was when she asked: "What are you going to name the child?" Gail said, "Dweezil."

Gail's got a funny-looking little toe which had been the source of family amusement so often that it had acquired a 'technical name': it wasn't really a toe -- it was a "Dweezil." I thought then, and continue to think today, that Dweezil is a nice name. Fuck the nurse if she didn't like it.

The nurse pleaded and pleaded with us not to name the child Dweezil. Labor pains and all, she was going to make Gail stand there unless we gave her another name to put on the form. I couldn't see letting Gail suffer just to argue the point, so I rattled off an assortment of first names of guys we knew: IAN (Underwood) DONALD (Van Vliet) CALVIN (Schenkel) EUCLID (James "Motorhead" Sherwood). As a result, Dweezil's original birth certificate name was Ian Donald Calvin Euclid Zappa. The nurse thought that was okay.

In spite of this harrowing experience, we always called him Dweezil. He was five years old when he discovered the real names on his birth certificate.

(I was in my mid-twenties when I found out! Up until the time I had to get a passport for the first European tour, I thought my name was Francis -- a name I had always hated. In order to get the passport, I had to present my birth certificate -- a mysterious document I had never seen before. My mother mailed it to me from California, and on it, much to my delight, was a name OTHER THAN FRANCIS -- well, it wasn't that good -- "Frank" isn't much of a bargain -- but I had thought for years, even printing it on album covers, that I was Francis Vincent Zappa Junior. How could I be such a fool?)

Dweezil was very upset, and demanded that steps be taken to rectify this tragedy. We hired an attorney and had his name legally changed to Dweezil.

He recorded solo albums, as well as collaborated with his brother Ahmet Zappa in a group named "Z". Dweezil Zappa ied the Frank Zappa-tribute band named "Zappa Plays Zappa" from 2006.

His career outside of the music world has ranged from providing the voice of Ajax in the Duckman cartoon to presenting a TV food show with his then girlfriend Lisa Loeb. He married Lauren Knudsen in 2005.