Difference between revisions of "Don & Dewey" 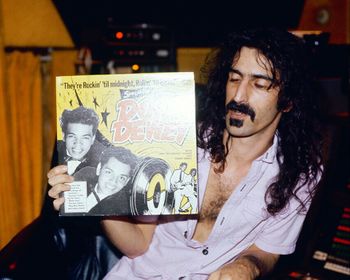 Don & Dewey had a short-lived reunion in 1964, playing briefly for Little Richard's band. After that they each went their own ways. Harris passed away in 1999, Terry in 2003.

Zappa owned the compilation record Art Laboe's Memories Of El Monte (1960), on which Leavin' It All Up to You by Don & Dewey was a track. In The Real Frank Zappa Book (1989) Zappa wrote: "Don was also an R&B fiend, so I'd bring my 45s over and we'd listen for hours on end to obscure hits by the Howlin' Wolf, Muddy Waters, Sonny Boy Williamson, Guitar Slim, Johnny "Guitar" Watson, Clarence "Gatemouth" Brown, Don & Dewey, the Spaniels, the Nutmegs, the Paragons, the Orchids, the etc., etc., etc.".

Zappa later name-checked Don & Dewey in the inner sleeve of "Freak Out!" (1966) under the heading "These People Have Contributed Materially In Many Ways To Make Our Music What It Is. Please Do Not Hold It Against Them".

On 22 November 1968 Zappa was a guest DJ at KPPC, Pasadena radio station, where he played three tracks by Don & Dewey in a row: "Miss Sue", "Little Love" and "Soul Motion".

In May 1981 Zappa was guest DJ at Dr. Demento's radio show, where he played "Jungle Hop".

On the bootleg record Frank Zappa's Jukebox Don & Dewey's Leavin' It All Up to You is one of the selected tracks.