Difference between revisions of "Devo" 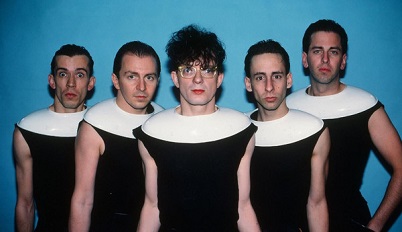 Devo is an American band formed in Akron, Ohio in 1973. They are known for their punk, art rock and new wave sound, which combines absurd humor and satirical social commentary. They are best known for their hit song "Whip It" (1980).

"We didn't know The Tubes at the time, probably not until we were on song number twenty or so, but we got to realise they were deep into what we were doing, while both Zappa and Captain Beefheart were an inspiration to us. So we were encouraged, but we also liked Kraftwerk and Roxy Music, and thought that if they were there then it all seemed to be coming round to what we were doing." - Interview with Gerard Casale (Devo) [1].

In the section "How Did They Manage To Do That?" in the chapter "All About Music" in The Real Frank Zappa Book, FZ uses "Fake Devo" as an example of an American Archetypal Icon Module, certain tricks which evoke familiar sounds and add new twists to the lyrics. He describes "Fake Devo" as "anything absolutely squared-off, mechanical, dry and dead-sounding."