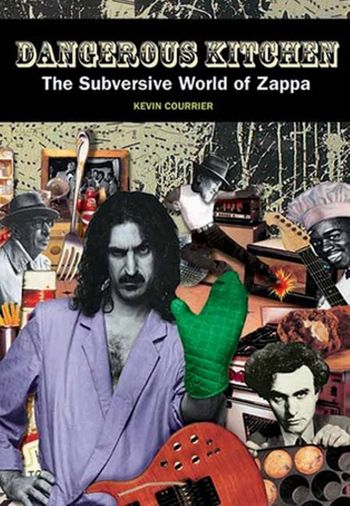 The Dangerous Kitchen: The Subversive World of Zappa is a biography about Zappa, his life and music, written by Kevin Courrier, ECW Press, 2002, ISBN 1-55022-447-6.

"The name Frank Zappa often conjures up the image of a deranged satirist. But for close to thirty years, between 1966 until his untimely death from prostate cancer in 1993, Frank Zappa was one of the most influental, innovative, and controversial musicians in contemporary and popular music (despite little airplay on the radio). Beginning with his band, the Mothers of Invention, Frank Zappa built a formidable career in rock and roll by combining a wide range of styles, including serious contemporary music, jazz, rhythm and blues, doo-wop, and social and political parody. Yet Zappa was often portrayed as a drug addict (even though he announced drug use) and a fetishist (despite a normal married life.

In Dangerous Kitchen: The Subversive World of Frank Zappa, Kevin Courrier explodes those myths by illuminating the facts about this outrageously gifted composer. Courrier illustrates that Zappa's musical career -- which poked fun at middle-class conformity, the hippie sub-culture, disco, the rock industry, and the Reagan era -- had its roots in the artistic rebellion against Romanticism in the nineteenth century. The book draws links to the musical and cultural antecedents of Frank Zappa's career, including Erik Satie, Arnold Schoenberg, Anton Webern, Igor Stravinsky, and Zappa's true hero, Edgard Varese, who was as much a scientific inventor of electronic sounds as he was a dynamic avant-garde composer. This book examines Frank Zappa as a composer, performer, political artist, and American original."