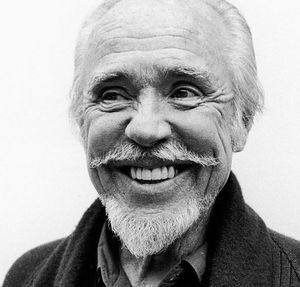 Nancarrow is best remembered for the pieces he wrote for the player piano. He was one of the first composers to use musical instruments as mechanical machines, making them play far beyond human performance ability. He lived most of his life in relative isolation, not becoming widely known until the 1980s.

"If there's any influence in Uncle Meat it's from Conlon Nancarrow. He's a composer who lives in Mexico, but was born in Kentucky. He writes music for player-piano that is humanly impossible to perform. He writes all these bizarre canons and weird structures – punches them out on player-piano rolls. The stuff is fantastic; there are a few albums of it. If you've never heard it, you've got to hear it – it'll kill you. Some of it sounds like ragtime that's totally bionic." - Frank Zappa in Zappa, 79/8.

Nancarrow is mentioned in "Peaches III" on Tinseltown Rebellion: "Let's hear it again for another great Italian. Conlon Nancarrow, ladies and gentlemen!"

Conlon Nancarrow was also mentioned and thanked in the liner notes of The MOFO Project/Object (2006) album. [1]

Den Simms: Would you say that Conlon Nancarrow is the predecessor of what you do with the Synclavier?

Frank Zappa: Not completely. Certainly there's a huge influence, conceptually, in what Nancarrow did. In fact, when Nancarrow was in southern California, I tried to get him to come over, so I could demonstrate the machine to him, because here's a guy who pioneered a type of sequencer music, using a player piano, but it's a limited timbre. It's only the sound of that one instrument ...

Frank Zappa: ... and I just thought that the way his mind works, if he would learn how to use the Synclavier, [he] would be able to hear all different kinds of things out of it, but I never got him to come over, and I doubt whether he's ever gonna get into it, but, y'know, I have to tip my hat to him, certainly.

Den Simms: He lives in Mexico City, doesn't he?

Den Simms: Yeah, he's come up with some interesting stuff.