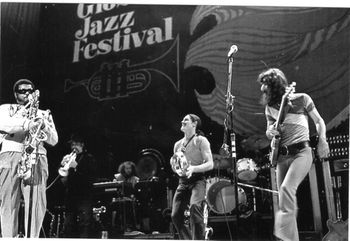 On 31 January 1969 Frank Zappa and The Mothers of Invention performed at the Boston Globe Jazz Festival, where they jammed together with jazz legend Roland Kirk and his band.

"The first time we played with Rahsaan Roland Kirk was at the 1968 Boston Globe Jazz Festival. After his performance, when introduced to him backstage, I said I really liked what he was doing, and said that if he felt like joining us onstage during our set, he was more than welcome. In spite of his blindness, I believed we could accommodate whatever he wanted to do. We began our set, wending our atonal way toward a medley of 1950s-style honking saxophone numbers. During this fairly complicated, choreographed routine, Rahsaan, assisted by his helper (can't remember his name), decided to join in." - Frank Zappa in The Real Frank Zappa Book, though he remembered the year incorrectly. [1] [2] [3] [4]