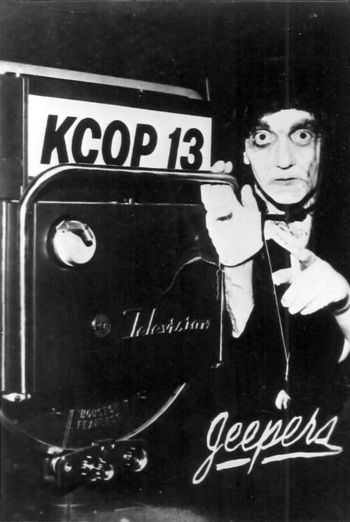 Bob Guy (New York, July 30, 1920 - Tacoma, Washington, September 10, 1984) was an American TV show host and programme director for Channel 13. He presented a local tv show, "Jeepers' Creepers Theater" (1962-1966), where he showed horror B-movies, dressed up as a vampire called Jeepers. "Jeepers' Creepers Theater" combined horror with ironic, self aware comedy. The program was one of Zappa's favorite TV shows at that time.

Zappa invited Guy in 1963 to record two singles, Dear Jeepers and Letter From Jeepers, where Guy played his stage persona reading a letter from Dracula and writing one back as well. According to page 73 of Barry Miles' Frank Zappa: A Biography most of the monologue was written by Guy himself and the idea itself was based on the novelty single John Zacherle's "Dinner With Drac, Pt. 1" (1958). (But to be fair: comedy songs with a horror theme were very popular at the time, including "Monster Mash" (1962) by Bobby Pickett & The Crypt Kickers. And one of Zappa's main influences, Spike Jones, also recorded a similar horror comedy song called "My Old Flame" in 1947.)

Guy's character Jeepers would later be referenced in list of influences inside the sleeve of Freak Out! (1966), under the heading: "These People Have Contributed Materially In Many Ways To Make Our Music What It Is. Please Do Not Hold It Against Them".