Difference between revisions of "Aynsley Dunbar" 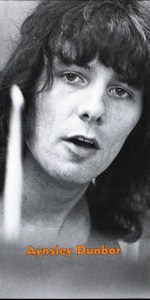 Aynsley Dunbar in the sleeve of Carnegie Hall. 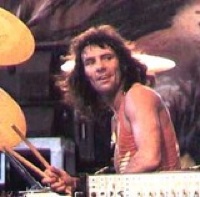 Aynsley Thomas Dunbar (Born January 10, 1946, Liverpool, England) is a British drummer. He was a member of John Mayall's Bluesbreakers, along with Peter Green & John McVie who would form Fleetwood Mac. He then joined the Jeff Beck Group, before forming his own band 'Retaliation'.

In the winter of 1969 Retaliation appeared at the 5-day Amougies Festival, which was also attended by Frank Zappa, acting in the unlikely role of Master of Ceremonies. At this event FZ got to jam on two numbers with Dunbar's band, which included keyboardist Tommy Eyre and bassist Alex Dmochowski, (aka Erroneous).

Meanwhile, Zappa had remembered Dunbar's skills from their jamming session in Belgium and, later in the Spring of 1970 at a meeting in The Speakeasy Club in London, FZ invited Dunbar to join his band in America. Blue Whale was disbanded and Dunbar moved his kit into Zappa's basement. Chunga's Revenge followed, although Dunbar did reappear back in England for the 1970 Bath Festival of Blues - in a one-off line-up, drumming with John Mayall, Ric Grech and Peter Green.

As a member of FZ's bands Dunbar provided drums for:

As a member of bands on FZ's Beat The Boots series:

As a member of an FZ band on other artists albums: