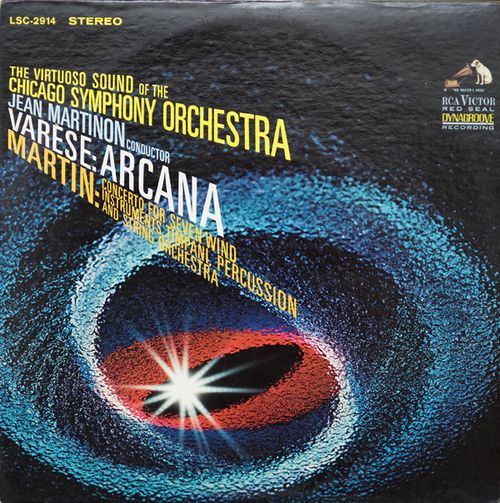 The 1966 album recording of Edgard Varèse's Arcana, conducted by Jean Martinon, performed by the Chicago Symphony Orchestra, recorded by RCA Victor Red Seal, as recommended by Zappa in Edgard Varèse: The Idol of My Youth.

"I would recommend the Chicago Symphony recording of Arcana on RCA (at full volume)." - Frank Zappa in Edgard Varèse: The Idol of My Youth, June 1971.

Interviewer: In Varèse's biography there are times where Louise seems to indicate where Edgar, like Stravinsky, didn't like emotion in his music.

Zappa: "Well, it depends on how you're going to use the word "emotion". I think that from a scientific standpoint the way that materials are put together you wouldn't think of as an emotional procedure, but the materials have a very emotional impact when you hear them put together. And there are certain indications in the score that aren't just "play this loud, play this soft." There's one part in "Hyperprism" where the trombone player is instructed to say "ho ho ho" through his horn. That's not much of an emotion, but it's not exactly scientific either. And in either "Amériques" or "Arcana" it has that little piccolo melody that's doubled with bells dancing along up on the top, and when he wrote that she told me that he would demonstrate it and whistle it and kind of dance around the room a little bit, and it was a cheerful thing – not all deadly serious in the sense that these are measured qualities being played against each other in order to yield this scientific result at the end of the piece. I mean, it's human music, and that's one of the reasons why I get such a good feeling from it – because it's not based on a mathematical formula. It's not like that other sterile kind of music that's really pretty hard to take. He's dealing with SOUND; he writes that stuff because it SOUNDS good." - Frank Zappa in Frank Zappa on Edgar Varèse, 21 November 1981.

"I would buy a ticket to see the Chicago Symphony play Arcana by Edgard Varèse, for instance. But that ain't gonna happen, so I'm staying home." - Frank Zappa in 20 Questions: Frank And Moon Unit Zappa, November 1982, Playboy Interview by David and Victoria Sheff.