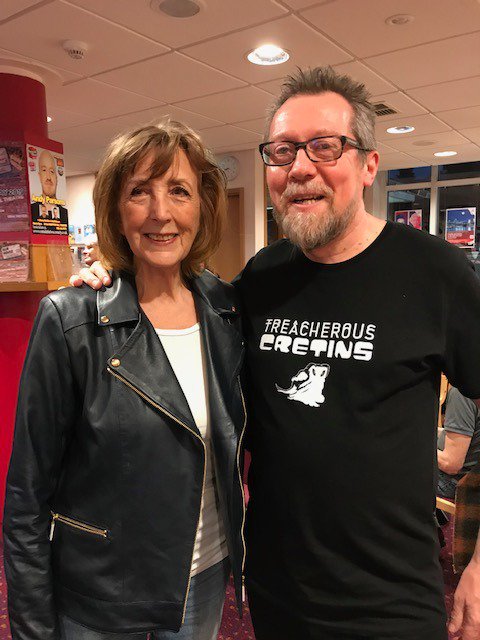 Andrew Greenaway and Pauline Butcher in a shirt referencing Treacherous Cretins and the Smog Monster from Sleep Dirt, 2019.

Andrew Greenaway is a British writer and website curator. From 1988 on he wrote articles for the Zappa fanzine T'mershi Duween, published by Fred Tomsett. He wrote a monthly column, From A to Z for the Dweezil Zappa Fan Club Magazine, published by Cindy Zeuli. He was also active as a writer and interviewer for Society Pages and the Z-Zine. [1]. Greenaway hosts the Zappa fan website www.idiotbastard.com, of which the logo is designed by Don Preston.

Greenaway wrote the book Zappa The Hard Way (Wymer UK, 2010), which was launched at Zappanale #21, August 2010. The work deals with Zappa's final tour in 1988 and how it was prematurely discontinued over internal troubles. He also wrote Frank Talk: The Inside Stories of Zappa's Other People (Wymer UK, 2017), which collects all interviews with people who knew and worked with Zappa over the last three decades. [2] In 2019 he, Mick Zeuner and Klaus Kühner also published The Zappa Tour Atlas (Wymer UK, 2019), a comprehensive list of all of Zappa's tours. [3], which has a foreword by Robert Martin. A limited (500) edition hardback coffee table photo book of Zappa’s last tour entitled FZ88 [4] was also released through Wymer UK a couple of months prior. It is based around the photos of Sergio Albonico, and features a narrative written by Greenaway.

Greenaway compiled various Zappa-related CDs for Cordelia Records, including the Zappanale volumes 17 and 18, co-compiled with John E. Campbell. In 2007 he released his own album, 20 Extraordinary Renditions (2007), which features a cover of The Idiot Bastard Son, performed by John Tabacco and Nigey Lennon.