Difference between revisions of "Amériques" 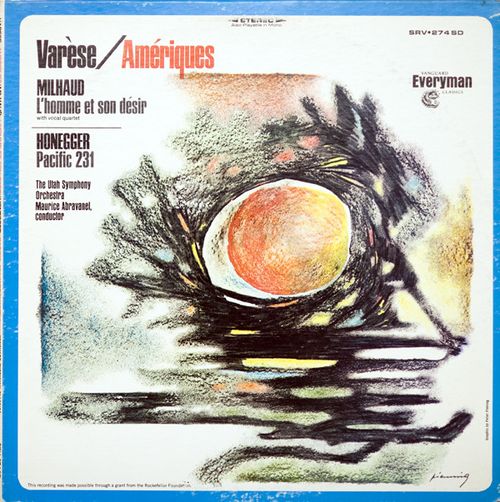 Amériques by Edgard Varèse, L'Homme Et Son Désir by Darius Milhaud and Pacific 231 by Arthur Honegger, conducted by Maurice Abravanel and the Utah Symphony Orchestra. This 1966 album, recorded by Vanguard, was recommended by Zappa himself as the best performance of Amériques.

Amériques is a 1921 composition by Edgard Varèse, but it remained unperformed until 1926.

It was his first work composed in the United States, since he moved to the country in 1915 because of World War I. It was at the completion of this work that Varèse, along with Carlos Salzedo, founded the International Composers' Guild, dedicated to the performances of new compositions of both American and European composers. The ICG's manifesto in July 1921 included the statement that: "The present day composers refuse to die. They have realized the necessity of banding together and fighting for the right of each individual to secure a fair and free presentation of his work."

In Son of Suzy Creamcheese, an article by Robert Shelton, The New York Times, 1966, Zappa said about Amériques: "It blows my mind. It’s my favorite top-40 record".

"I mean, a piece like "Amériques" by Edgard Varèse (...) would scare the average teenager to death. and I mean really scare 'em to death. Vanguard just released a recording of it.". - Zappa in Don Paulsen interviews FZ, 22 December 1966.

"I would recommend (...) the Utah Symphony recording of "Amériques' on Vanguard." (Edgard Varèse: The Idol of My Youth, June 1971)