Difference between revisions of "Alice Cooper"

Alice Cooper (real name: Vincent Damon Furnier) (born February 4, 1948 in Detroit, Michigan) is an American rock musician. He is best remembered for early 1970s hits such as "School's Out" (1972) and his then outrageous stage act where he dabbled in occult imagery.

His grandfather, Thurman Furnier was an Apostle of the Church of Jesus Christ and his father, Ether Furnier, was an ordained Elder.

Furnier formed a number of '60s bands, including The Earwigs, The Spiders and The Nazz - after moving to California in 1968, and realizing the latter name conflicted with Todd Rundgren's band, Furnier called the band Alice Cooper to capture the 'hard rock' image of "a cute little girl with an axe behind her back", as Furnier later recounted in an interview. Furnier changed his name to Alice Cooper in 1972 and it is now his legal name.

Under production of Zappa

Zappa saw Alice Cooper perform in L.A. in the early 1970s, before they were famous. According to Cooper: We were playing a big party in LA, with The Doors, Buffalo Springfield, Love – – all those great bands – and we came on next to last because we were the house band. Everybody in the audience was on acid, of course, grooving on peace and love, and then all of a sudden you hear this DA-NA-NAA-NAAA and there's these insanity-looking clowns onstage. We scared the hell out of these people. They were all on acid, we looked like we'd just come up out of the ground, and we didn't mind a little violence onstage. That audience couldn't get out of the room fast enough. It was like somebody yelled "FIRE!" There were three people left standing: Frank Zappa, my manager Shep Gordon and one of [celebrated groupies] the GTOs. Frank said, "Anybody that can clear a room that quick, I've got to sign."

It was Christine Frka who suggested Zappa to give Cooper a recording contract and she was instrumental in establishing their image. [1] In the interview Mother In Lore (1974) Zappa explained: Look at Alice Cooper. We were the first ones to sign them. They existed. I didn't , put them together, but I put out their first two or three albums. (...) They came to my house and auditioned. (...) About a year after we signed them they started really costuming it up. But they were always strange.[2] According to the Pulse Interview (1993) it was Zappa who encouraged Cooper to wear women's clothes on stage.

The band recorded their first album Pretties For You on FZ's Bizarre Records label (1969). The second album Easy Action was recorded on FZ's Straight label (1970).

From the beginning, the band incorporated theatrics in their stage act. FZ's 'groupie band', the GTO's, liked to "dress the Cooper boys up like full size barbie dolls", which played a major role in developing the band's early onstage look. A chance incident of an unrehearsed stage routine, involving Cooper and a live chicken, also led to the band receiving a lot of sensationalist press attention. Cooper claims that the chicken incident was an accident. He says he thought, "Chickens have wings, so they must be able to fly" so, when it was on the stage, he threw it out over the crowd with the intention of having the chicken fly away. But chickens cannot fly particularly well, and the bird was instead ripped to shreds by the rowdy audience. Zappa phoned him shortly afterward to ask if the rumor that he had 'ripped the head off a live chicken and drunk its blood onstage' was true. Cooper denied the rumor, whereupon Zappa told him, "Well, whatever you do, don't tell anyone you didn't do it." [3]

After the release of Easy Action in 1970 Straight moved under the Warner Bros umbrella, and the band relocated to their hometown of Detroit. Their popularity and longevity in the rock music genre was sealed with the release of the single "School's Out" in 1972.

References to Cooper in Zappa's work

The band is name-checked during What Kind Of Girl Do You Think We Are?:

In 2002 Mojo Magazine organized a poll where various rock musicians could choose their all time hero. Cooper picked Zappa: "Frank was the only one who stuck out his neck for us, for me. He was the one who said, "Here's a band that everybody in the business is laughing at - I like 'em." He was the perfect voice of cynicism, making fun of his audience, the establishment, the guys with the grey suits, the hippies, everyone. He was the outcast in LA, and so were we. We were the band everybody loved to hate. We stood for everything the hippies hated. We did not want peace, love and wonderfulness—we wanted Ferraris, money, girls, switchblades. Frank loved it. He said, "I'm starting a record company [and] I want you guys to be on it because it's for all the misfits out there." I'd watch him work in the studio and he was so far beyond anything I could imagine. All the stuff you hear on the Zappa albums that sound like little improvisations and mistakes, they're all written—every little squeak, bump and fart. I was in a place called The Experience one night in '68 or '69. Mike Bloomfield was in there, Jimi Hendrix was in there, Elvin Bishop. The premier guitar players all playing, all taking a solo . . . then Frank gets up and does an imitation of everyone there—Mike, Jimi, the whole—and then plays his own stuff. You should've seen the look on Hendrix's face! He blew everybody away. People were just atounded by the guy's virtuosity. We got to be very good friends. If you could make him laugh, you felt like you scored big. I'd sit there pretty quietly like a little mouse watching him work. He was truly one of a kind. There's nobody else out there trying to even be Frank because he's too hard to imitate. We could use a Frank right now." [4]

Cooper said in a September 23, 2009 interview with Blabbermouth: Now, someone with a good sense of humor is Rob Zombie. Rob's a tattoo parlor come to life. His stuff is so animated. He has as much reverence for Bela Lugosi as he does The Munsters; the scary and the absurd. He's like my brother. We have exactly the same sense of humor. Frank Zappa was like that. Zappa had a real sense of absurdity, for the right reasons. He understood absurdity, what cannot be explained. You look at it and it's purely absurd for the sake of being absurd. [5]

In 2011, Rob Zombie inducted Alice Cooper in the Rock 'n' Roll Hall of Fame and did this by telling the famous story of how Zappa signed Cooper, while he held up photographs of them. [6] 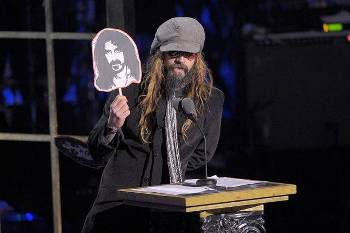 In an interview with The Guardian from January 21, 2012 Cooper said: (...)"In high school we were writing these horrible little songs, and some of them ended up on "Pretties For You". Frank Zappa liked us because he would say, "You've got five songs here that are two minutes long, and there's 38 changes in each one of them!" The great compliment was, he would go, "I don't get it – that's great, that's why I'm signing you." [7] In the same interview he said he preferred Zappa over Captain Beefheart: "Frank was the maestro. All the musicians looked up to Frank as being the Leonard Bernstein of rock – the know-all. That goes for Clapton, The Beach Boys, The Beatles. Everybody looked up to Frank."