Difference between revisions of "Albert Einstein" 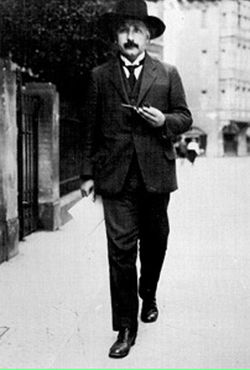 A photo of a young Einstein, possibly one of those used for the album cover of "We're Only In It For The Money".

"He had great hair, you know. And the thing that I like about Albert Einstein and I hope it's not an apocryphal story. He liked the television show that I liked, which was "Time For Beany". I heard a story that he left an important meeting one time telling the people he had to go watch "Time For Beany". And I hope that's true." [1]

He is listed in Them Or Us (The Book).

Einstein on the cover of "We're Only In It For The Money".

Einstein is also the only person pictured on the cover of We're Only In It For The Money [2] who also appeared earlier on the album cover of Sgt. Pepper's Lonely Hearts Club Band (1967).