From Zappa Wiki Jawaka
Revision as of 07:01, 4 October 2021 by Duncan (talk | contribs) (Created page with "right|thumb|400px|Poster <blockquote> The Mothers were a last minute addition to the Thursday concert. They are far and away the best group in pop-folk-...")
(diff) ← Older revision | Latest revision (diff) | Newer revision → (diff)
Jump to navigation Jump to search 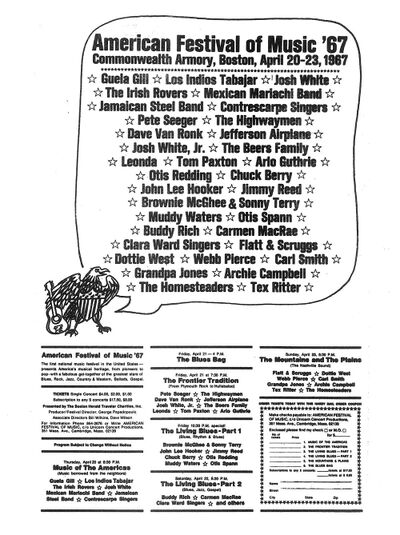 The Mothers were a last minute addition to the Thursday concert. They are far and away the best group in pop-folk-rock music today. The can and do cut any group. Beneath the fright wigs and Hallowe'en costumes are the best musicians that ever plugged into a wall socket. There were lot of ill-mannered shouts for The Mothers earlier in the evening, but, judging from the astonished reaction of the audience at the end, almost no one anticipated the performance these fantastic people gave. They did a burlesque of 1950s Rock 'n' Roll but did it so well that it was no longer a burlesque. They played harsh, atonal rock which sounded like the new jazz of Archie Sheep but which made more immediate sense. And they have a tiny girl singer who belts out songs with so much power that she sounds as though she could make Mamas Case and Michele sound like Chip 'n' Dale. Get to hear them; they will be a Gerde's in New York most of the summer, I believe. But be warned - after The Mothers, most every other group is going to sound like The Infants. - Ralph Earle