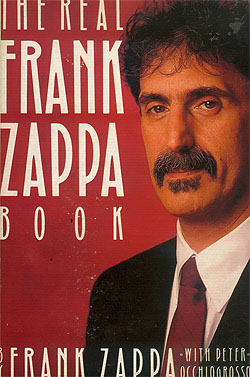 "A lot of stuff in that book is bull shit. It was just his imagination."

History (the making of)

From "The Real Frank Zappa Book":

I don't want to write a book, but I'm going to do it anyway, because Peter Occhiogrosso is going to help me. He is a writer. He likes books - he even reads them. I think it is good that books still exist, but they make me sleepy. The way we're going to do it is, Peter will come to California and spend a few weeks recording answers to 'fascinating questions,' then the tapes will be transcribed. Peter will edit them, put them on floppy discs, send them back to me, I will edit them again, and that result will be sent to Ann Patty at Poseidon Press, and she will make it come out to be 'A BOOK.' One of the reasons for doing this is the proliferation of stupid books (in several languages) which purport to be About Me. I thought there ought to be at least ONE, somewhere, that had real stuff in it. Please be advised that this book does not pretend to be some sort of 'complete' oral history. It is presented for consumption as entertainment only.

SO, A FEW PRELIMINARY NOTES:

[1] An autobiography is usually written by somebody who thinks his life is truly amazing. I do not think of my life as amazing in any sense - however, the opportunity to say stuff in print about tangential subjects is appealing.

[2] Documents and/or transcriptions will be labeled as such.

[3] The epigraphs at the heads of chapters (publishers love those little things) were researched and inserted by Peter - I mention this because I wouldn't want anybody to think I sat around reading Flaubert, Twitchell and Shakespeare all day.

|4] If your name is in the book and you didn't want it to be there (or you don't like my comments) - my apologies.