The GTO's were a collection of groupies from the late 60's L.A. music scene. The group started out as the Cherry Sisters and then became the Laurel Canyon Ballet Company, performing as an opening act for the Mothers of Invention, providing 'performance art' in a mix of theatrics, off-key singing, dance and spoken word. Their activities gained attention from a wider audience with the release of their album Permanent Damage. The group were: 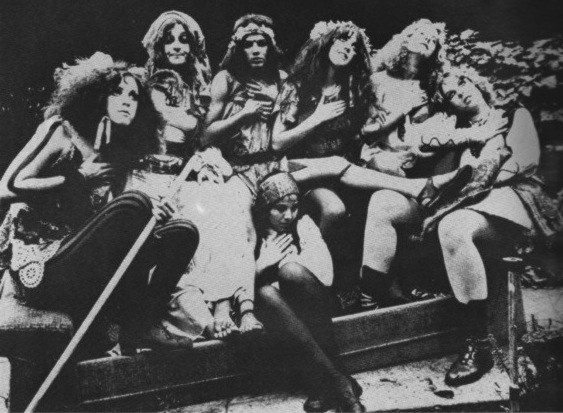 The GTO's were mentioned during "Star Special", with FZ as a guest DJ, on BBC Radio 1 in 1980. Pamela Des Barres (ex GTO Miss Pamela) says of the group:

"The GTO's (which stands for Girls Together Outrageously) were a loose collection of groupie-chicks that collected around the FrankZappa/Mothers of Invention/L.A. Rock-N-Roll scene in the late 60's/early 70's. The point of this amalgamation of super-groupies was to attract as much attention as possible (which they did) from rock gods and other celebrities, via a combination of freaky makeup, clothes and behavior (which was often spurred by rampant drug use and abuse). In terms of originality and inventiveness, most of the GTO's looked pretty rad...".