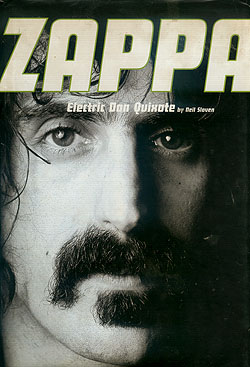 "Electric Don Quixote: The Story Of Frank Zappa is the biography that has been waiting to be written, and the one that will become the definitive last word on the musical phenomenon that was Frank Zappa.

Zappa died in 1993 after a long battle against cancer. He left behind a huge body of work that will one day be recognised as the work of a true musical genius.

Zappa was cantankerous, humorous, irreverent, articulate, brilliant and a workaholic, right up to his death. Controversy seemed to follow his every move, yet he stood unflinchingly by his beliefs and in the process became a scourge of the establishment and a hero to his fans.

Writer, record producer and music historian Neil Slaven, a devoted follower of Zappa since he first heard The Mothers Of Invention in 1966, has produced the first-ever comprehensive chronicle of Zappa's extraordinary life and career. It is written with authority, knowledge, humour, respect and affection.

Neil Slaven is one of Britain's leading authorities on the blues, and is a succesful record producer. He compiles and writes sleeve notes for CDs and works as an advisor to a number of record labels. He is a major contributor to the Encyclopedia Of Popular Music and has written for a number of magazines, including Vox, Mojo and Billboard."