Tom Troccoli of Society Pages used shooting scripts and other sources to compile a listing of all the music that would have been included:

These Songs were originally intended for use, but didn't make it to the final shoot:

MIND-BOGGLING EAR-BLOWING POP FANTASY AT ITS BEST! "Touring can make you crazy", announces ex-Beatle Ringo Starr at the start of the movie, "And that's what 200 Motels is all about". So prepare youself for an explosion of outrageous, fast and furious humor, zany satire and extraordinary visual invention in a riveting musical fantasy of the Seventies which makes most of today's pop videos look tame by comparison. The movie is a surrealistic 'documentary' about what happens when the performers on a rock tour begin to feel that every motel, every auditorium and all the groupies start to look alike. Set in the mythical town of Centerville, USA, 200 Motels stars Frank Zappa, the leader of one of the Seventies' greatest rock bands, The Mothers Of Invention, along with Ringo Starr, Theodore Bikel and the legendary Keith Moon, coming together in a consistently fascinating and free-wheeling movie that is a treat for all fans of Frank Zappa and his group and a not-to-be-missed eye and ear-opener for every addict of great pop music. Said Time: "The craziness climaxes, fittingly enough, with a full cast and chorus raising their voices in an irreverent anthem: "Lord, have mercy on the fate of this movie/and God bless the mind of the man in the street". Mothers fans will be ecstatic. Don't miss it.

Just the right touch of insanity... a stunning achievement." - Robert Hilburn, Los Angeles Times. 200 Motels is Frank Zappa's outrageous, psychedelic precursor to today's rock videos - his hilarious response to the burning question of what to do with road-wrecked musicians. Should they rip off the motel's towels and ashtrays or merely quit the group? Dare they rebel against the tyranny of the merciless Zappa? "The Mothers Of Invention," as irrepressible as Zappa himself, wreck havoc in Centerville, a "typical" American town with its Rancid Boutique, Cheesy Motel, Fake Nightclub, Redneck Eats Cafe, groupies and an honest-to-goodness Main Street. Ringo Starr, in Zappa disquise and carrying an oil lamp, narrates. Theodore Bikel is government agent Rance Muhammitz. The hysterically funny man behind such hits as "Valley Girl," "Dancin' Fool" and "Don't Eat The Yellow Snow," Zappa reasserts his genius in this "zaniest piece of filmusical fantasy-comedy since The Beatles' A Hard Day's Night." - Daily Variety

Financed by United Artists for half a million dollars, shot using innovative video technology at Pinewood Studios in seven days, after only five days of rehearsal, with the Royal Philharmonic Orchestra and the Top Score Singers. It was filmed on four simultaneously running video cameras. One-third of the 320 page script was never shot.

It is a surrealistic look at how touring makes you crazy and the efforts that band members have to go through to get some sexual "action". The entire movie is a musical with some lines of dialogue but mainly songs.

The movie also features a 10 minute animated sequence by Cal Schenkel, with a cameo appearance of Donald Duck. 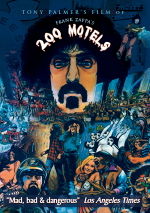