From Zappa Wiki Jawaka
(Redirected from We're Only in It For the Money)
Jump to: navigation, search

Zappa said that they began this album with the song "Mom & Dad".[3]

Originally intended as the picture inside the cover but used (because MGM feared litigation by EMI) as the outer sleeve image for the initial release.

Later releases would switch the cover images back as originally intended. 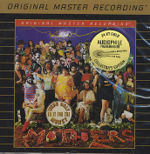