Teddy And His Patches

Teddy And His Patches originally formed in San Jose by Teddy Flores Jnr. in 1964 but came to nothing. The name was derived from Flores eye patch worn as he had lost an eye from cancer. 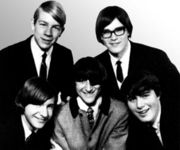 Teddy Flores formed a new band in 1966 with Bernard Pearson (lead guitar), David Conway (keyboards), Steve "Herbie" Urbani (bass) and Steve Marley (drums). They enjoyed some local success and opened for bands such as The Doors and Moby Grape in San Jose.

In 1967 Conway and Jerry Ralston wrote a song called Suzy Creamcheese based on the spoken introduction from The Return Of The Son Of Monster Magnet which Ralston "borrowed". Conway later explained: "We had no clue who Frank Zappa was at that time."

Chance 668
The single "Suzy Creamcheese"/"From Day To Day" (Chance 668) was recorded by Grady O'Neil for his Chance label in San Jose and was released in February 1967 enjoying some local success.