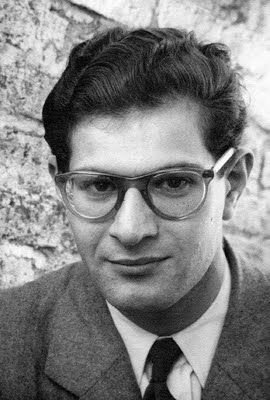 Mauricio Kagel (born in Buenos Aires, Argentina, December 24, 1931 - September 18, 2008) was an Argentine composer. He is most famous for his interest in developing the theatrical side of musical performance. Many of his pieces give specific theatrical instructions to the performers, such as to adopt certain facial expressions while playing, to make their stage entrances in a particular way, to physically interact with other performers and so on. His work has often been compared to the theatre of the absurd, and he is often talked of as the musical equivalent of Eugène Ionesco. Kagel has also written a large number of more conventional, "pure" pieces, including orchestral music, chamber music, and film scores. Many of these also make references to music of the past. He studied theory, singing, conducting, piano, cello and organ with private teachers, but as a composer was self-taught. Emigrated to Cologne (Germany) in 1957. Founded the "Kölner Ensemble für Neue Musik" (Ensemble for New Music) in 1959. Luciano Berio, Pierre Boulez, Karel Goeyvaerts, Mauricio Kagel, György Ligeti, Luigi Nono, and Karlheinz Stockhausen belong to that handful of composers that provoked a landslide in the music of the ‘50s and ‘60s of the past century, that has remained unparalleled up to now.

Mauricio Kagel is named in the list of influences inside the sleeve of Zappa's debut album "Freak Out!" (1966) under the heading: "These People Have Contributed Materially In Many Ways To Make Our Music What It Is. Please Do Not Hold It Against Them".